On May 28th, “A Quiet Place 2” was officially released.

Co-starring Emily Blunt and John Krasinski, a well-known husband and wife file in Hollywood, this is also the directorial debut of John Krasinski.

“A Quiet Place”, released in 2018, tells the story of human beings being attacked by unknown monsters. Monsters can only hunt humans based on their voices. The family who survived the disaster came to the countryside.

In order to avoid the monsters, they can only live in a “silent” world, but the birth of a newborn makes them even more troublesome.

Related Post:From dodging to taking the initiative, the thriller “A Quiet Place 2” is full of highlights.

Back then, although “A Quiet Place” was a small-cost film, it made the audience shout “ingenious” with its novel “silent” setting.

In the movie, the “sound-killing” part of the scene makes the audience feel so nervous that their palms are sweaty during the viewing process.

The sequel is still created by the original crew of the first part, and the recognized acting actress Emily Blunt once again takes the lead role.

Because in the previous story, the “father”, the family’s biggest reliance, chose self-sacrifice to save the child.

In “A Quiet Place 2”, the mother will continue the escape journey with her three children.

But overall, the box office of “A Quiet Place 2” did not meet expectations. The previous game achieved a return of more than US$300 million with a production cost of US$17 million.

From “doomsday escape” to “doomsday confrontation”, for the audience, the perception of “A Quiet Place 2” is undoubtedly greatly improved.

The reason why “A Quiet Place” was so successful was the setting of “You can live without making a sound”.

Therefore, the whole movie has reached the extreme for the creation of a horror atmosphere. You can even hear your own heartbeat during the movie watching in the theater. Such a novel plot setting naturally attracts a lot of audiences.

In “A Quiet Place 2”, the horror setting of the previous work is continued.

For the audience, the first time can get a strong psychological impact, but the second time this sense of horror will be greatly reduced.

Even if a more grand scene is added, the most important thing of a horror movie is lost, so it makes sense that the box office is not as good as expected.

However, “A Quiet Place 2” is still a movie suitable for viewing on the big screen.

The publisher of “A Quiet Place 2” not only retained its decision to be shown in theaters, but also announced that it would not be available on Paramount+ until 45 days after the theater was released.

Although the 90-day window period has been shortened by half compared with the previous few years, “A Quiet Place 2” is left to the hospital when the theater window period of many Hollywood films has shrunk and even synchronized with the streaming platform. The line time is relatively sufficient.

Related Post:”A Quiet Place 3″ will be released the next year, this one still needs to keep quiet.

With the opening of theaters in North America, “A Quiet Place 2”, which is suitable for big screens and retains a 45-day window period, may become a “touchstone” in the North American film market.

In addition, according to reports, Emily Blunt revealed the news about “A Quiet Place 3” in an interview.

She expressed that she wanted to make the “A Quiet Place” trilogy with her husband John Krasinski, and there will be more plots and possibilities to unfold: “John already has a complete idea of ​​the sequel story that can be executed, but I think Before he invests in making the third part, he would like to know what the audience thinks about the second part.” 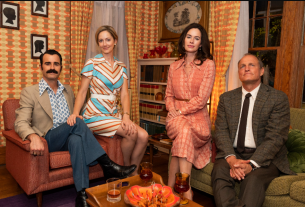 Netflix lays off about 150 people due to budget cuts, more will leave in the future