The psychological thriller ‘The Wonder‎’ starring Florence Pugh released the official trailer, which will be released in a small area in Northern America on November 2, and will be launched on Netflix on November 16.

The 26-year-old actress stars as an English nurse trying to crack the case of why an 11-year-old girl hasn’t eaten in four months in The Wonder, an upcoming Netflix period drama-thriller based on the 2016 Emma Donoghue (Room) book of the same name.

An official trailer for The Wonder, released Tuesday, shows Pugh’s character Lib Wright arriving to help care for “a young Irish girl, Anna O’Donnell (Kíla Lord Cassidy), whose Catholic family claim she has eaten nothing since her eleventh birthday … four months ago.”

While the girl is alive and appears perfectly healthy on the outside, “Anna is in danger,” Lib says.

“I’m here to find out the truth,” she adds later in the trailer.

After Anna insists to Lib that she isn’t nervous about what is going on with her, Lib says later, “Do you know the dangers of a prolonged fast, Anna?”

“I don’t need to eat,” the latter replies. “I live on manna. From Heaven.”

“And how does that feel?” Lib asks, to which Anna responds simply, “Full.”

According to an official synopsis, The Wonder — which premiered at the Telluride Film Festival and screened at several other festivals, including the Toronto International Film Festival — is set in 1862, “13 years after the Great Famine.”

“An English Nightingale Nurse Lib Wright (Pugh) is called to the Irish Midlands by a devout community to conduct a 15-day examination over one of their own,” the synopsis adds. “Anna O’Donnell (Cassidy) is an 11-year-old girl who claims not to have eaten for four months, surviving miraculously on ‘manna from heaven.’ As Anna’s health rapidly deteriorates, Lib is determined to unearth the truth, challenging the faith of a community that would prefer to stay believing.”

Netflix shared the first look at Pugh in The Wonder in August 2021, wearing period garb in character as an English nurse. Standing in front of a foggy cemetery, the actress looked back at the camera in the snapshot wearing a blue dress and a flannel draped over her shoulders.

“Florence Pugh stars in The Wonder — a psychological thriller set in 1862 about an English nurse who is brought to a tiny Irish village to observe a child who is said to have survived without food for months,” Netflix teased at the time. “Is she a saint or are there more ominous motives at work?”

Pugh shared the photo on Instagram as well, saying in the caption that she and her fellow cast members and production crew had been “traipsing around the Irish hills for the last week and it’s truly been a magnificent start to a beautiful and exciting film.”

“What a story to get our teeth stuck into, what a crew to be working alongside and a fantastic director Sebastian Lelio to be leading us!” she wrote, shouting out the film’s director. “This will be fun.”

The Wonder, with a screenplay co-written by Donoghue, 52, will have a limited theatrical release on Nov. 2 before streaming on Netflix Nov. 16. 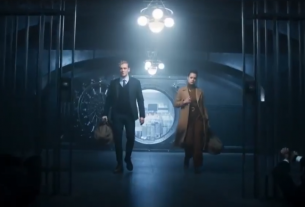