The movie ‘Spiderhead’, starring Chris Hemsworth, has been broadcast on Netflix platform on June 17. The movie is based on a short story by George Sanders, which tells the sinister story of a businessman and mad scientist, played by Chris Hemsworth, who uses prisoners serving time for drug experiments.

Although the film through the whole look, its storyline is slightly cheesy, the narrative approach is also bland, but there are still many viewers willing to pay for the film,.

The fundamental reason for this is the personal charm of Chris Hemsworth.

Marvel’s ‘The Avengers’ series of films, became a lot of actors, including Robert Downey Jr. and many other major film actors, after participating in a series of films, are successfully among the first-line Hollywood stars.

There is no doubt that Chris Hemsworth is one of these actors. And with the beginning of the post-reunion era, the film actors who played the first generation of the Avengers, began to see enough to take a break from the Marvel Cinematic Universe to seek other developments.

For example, Captain America’s actor Chris Evans, after ‘Avengers: Endgame’, acted in a number of popular movies including ‘Knives Out’.

Although Chris Hemsworth is one of the few actors from the original Avengers to still be working for Marvel.

But after the end of the ‘Thor: Love and Thunder’ shooting, the role of the first generation of Thor, in the Marvel Cinematic Universe, where to go, is an unknown.

And Marvel’s unprecedented in the normal Thor trilogy, and an additional film, is likely to want to rely on the “Chris Hemsworth” appeal, to complete the old with the new film layout.

The movie ‘Black Widow’, released last year, and the American drama ‘Hawkeye’, which came out this year, are both arranged in this way.

I’m sure Chris Hemsworth was well aware of this, so during his time with Marvel, he acted in a large number of other films to further increase his influence in Hollywood.

In fact, in addition to the Thor series and the Avengers franchise, Chris Hemsworth’s repertoire is still relatively broad, and is not bound by the unique image of the character of Thor.

Of course, limited by their own strong body, and manly handsome appearance, Chris Hemsworth in the film played the majority of the image, generally a standard figure of tough guy image.

For example, the previous year, also on Netflix, ‘Extraction’, “Chris Hemsworth” played a retired mercenary in the film.

As we all know, the movies that Netflix participates in are usually broadcasted on its own online platform, and few of them are theatrical films.

Therefore, the vast majority of Netflix’s films are destined to rank only in the middle of the pack when compared to the quality of Hollywood films as a whole.

Both the above-mentioned ‘Extraction’ and the recently launched ‘Spiderhead’ are all popcorn-style movies that follow the usual Hollywood commercial model.

And the reason why the audience is willing to pay for this type of film, is basically running to the actors.

Although this time Chris Hemsworth, not in the ‘Spiderhead’ film, to show off their strong muscle lines, but its role of some obsessive pathological scientists, but still won the hearts of many viewers.

As some viewers said, although the film is mediocre, but “Chris Hemsworth” face is still online. 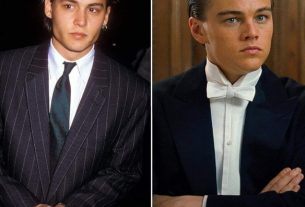 Count the movie roles that actors have refused to play: what you expect may not be the most suitable!