When it comes to Marvel and DC, there are some fans who will consciously stand in line, in the concept of these fans Marvel and DC are born to die against each other, so many times you can see in many comments involving Marvel and DC fans on the 2 sides of the scene of mutual dislike.

But in fact there is really no need, Marvel and DC from the origin to the achievements of this period of mutual relations are back and forth and back and forth.

Although the two sides are considered competitors in the business field, the relationship between the two sides is not as much of a “feud” as some fans make it out to be.

Because the relationship between Marvel and DC may be more “close” than you might think.

During this period, Marvel has made good progress in both movies and series. In addition to the promotion of the movies and series that have already been produced and are being released or are in line for release, movies like ‘Guardians of the Galaxy Vol. 3’, ‘Ant-Man and the Wasp: Quantumania’ and other movies as well as “Loki2” and other derivative series are also busy shooting.

But this is such a very busy situation, Marvel Studios’ big brother Kevin Feige is still able to divide his mind to shout directly to DC, so that they hurry up to update the work!

In this regard, DC is also successfully received Kevin big brother’s “hyped post”, DC’s “Batgirl” director Adil El Arbi in a previous interview with the media ‘The Hollywood Reporter’ has said, “Marvel’s Kevin Feige and some Marvel’s Kevin Feige and some other teams have been looking forward to DC’s “Batgirl” and have been constantly pushing for more ~”

Adil El Arbi: “At the time we wrote an email to Marvel saying we were going to do Batgirl, and then Kevin Feige, Victoria Alonso and Louis D’Esposito were all very happy and they asked us to make sure to tell them about any new developments. “

The host said: many fans think that Marvel and DC are rivals, why should the DC director provide “information” to Marvel?

In this regard, Adil El Arbi is also on the spot for the relationship between Marvel and DC to explain: “People say that Marvel and DC is a competitive relationship, but it’s not really true, DC and Marvel are very cordial to each other, we are each other’s loyal fans, Kevin Feige has been following our progress, want to know what will happen to the plot, he is a real fan, but it does suck, sometimes I really don’t know if I should talk to him.”

And, not just some of DC’s directors will tell Marvel some of the subsequent actions, in fact, Marvel often to DC “reveal” some of their subsequent works of intention, recently Marvel is on line ‘Ms. Marvel’ is a very typical example.

Adil El Arbi said that he has been “catching up” with ‘Ms. Marvel’ since its launch and was surprised by the visual effects presented in the ‘Ms. Marvel’ episodes.

For the early ‘Ms. Marvel’ in some of the creative planning, Adil said he was aware of the animation ideas, which did not exist at the time.

For this reason, Adil and others also later had direct confirmation to Kevin Feige, “We all love the aesthetics of animation and comics, and we couldn’t wait to ask Kevin Feige for confirmation at the time, and he said that he loved it, and he supported whatever the team wanted to do as long as it didn’t go too far.”

Obviously, the exchange of similar ideas and creativity is definitely not just a ‘Ms. Marvel’ production.

In fact, if there are fans who understand the development of some episodes between Marvel and DC should be clear, the 2 companies are rivals in the same field, but along with the development, there will be a certain degree of “circulation” between the two sides.

This “circulation” from the artists to writers and even management are present, for this reason, this is also a direct result of why we often see certain works between Marvel and DC style is very similar.

Because to a certain extent it is possible that 2 different characters in 2 universes, the author-painter behind them is the same person!

One of the more typical is the “Emperor of American comics” Jack Kirby: Jack Kirby created a lot of very classic IP, but also changed the whole American comic style of the big brother level existence.

Jack Kirby was also in Marvel and DC have stayed, and even now one of the important DC IP “New Gods”, in fact, is the masterpiece of Jack Kirby, and after returning to Marvel again, is also the trend to create a similar “Eternals”.

There is a little story here is that the original “New Gods” is actually Jack Kirby prepared for Marvel, but because at first Jack Kirby and Marvel had a little conflict, directly to DC, so the New Gods also took root in the DC universe.

So, between Marvel and DC is really not so much incompatibility between outsiders, more so-called “rivalry”, more is some fans themselves to their own “add drama”, it is not necessary. The first episode of “Ms. Marvel”, if there is an Avengers show in reality, do you want to go to it? 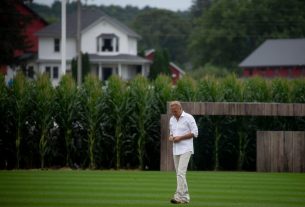