When it comes to suspense films, in addition to British, American and Korean films, Spanish films have always occupied a place. European and American suspense is good at creating fantasy and macro backgrounds. In recent years, Korean suspense also likes unnatural gimmicks such as crossing, while Spanish suspense always exposes the essence of human nature in simplicity.

Once the film “The Invisible Guest” made director Paul famous, it also made the Spanish suspense film into the public’s field of vision. Coincidence and inevitability were accompanied by coincidences. Coupled with the unpredictable human nature, this film is full of tension for the viewer Was hooked.

Three years later, the director Paul returned with “The Invisible Guest” starring Mario and Wagner. An authentic Western suspense drama “El inocente” came to his face. Paul is no longer the fledgling 10 years ago. Novice, this time the director is more proficient. The multi-thread switching and stitching can be described as a close fit. This is a group show without a clear protagonist. Everyone has realized self-salvation on this stage. There are no pure good and bad people, no nothing. Reasonable deception, everything is an arrangement of fate.

Although “El inocente” is not perfect, it does not prevent it from becoming a drama. The following three aspects will lead you to appreciate the charm of this suspenseful high-energy drama from the multi-clue narrative, confession-style lens language and profound theme presentation.

The first episode centered on Matt, condensing his tragic first half of his life in 40 minutes. At a party, he was seduced by a woman and caused conflict. Danny was overthrown to death by mistake. His good college time was instantly vanished. During his four years in prison, his parents Both died in a car accident. After being released from prison, he was taken in by his brother and established a brothers law firm. His life had changed. But his brother died of a cerebral hemorrhage. Only the male protagonist was left alone in the world. The screenwriter was also cruel enough to push the male protagonist into desperation when he came up. His only hope Put it on a woman.

In the second episode, the series is completely re-entered, centering on the female policewoman Lorena, and narrating her equally tragic past. Her parents divorced and witnessed her father who committed suicide by swallowing a gun. Her mother remarried and gave her to a monastery school. Since she was lack of love since childhood, she determined to be a policeman, and even broke up with her boyfriend to break up with her boyfriend for her own ideals. In her heart, she was not resentful of her father’s suicide. She wanted to use her identity as a policeman to try to understand her father.

The two completely independent descriptions of the first and second episodes made many netizens mistakenly believe that this episode might tell a story in one episode, but when Lorena knocked on the door of a house because of the investigation, she walked out of the house. The male lead gave the audience a strong sense of shock, and the director was just right, and when the audience was full of questions, he gave everyone the answers they wanted.

Just when the two clues meet, the third clue has actually emerged quietly. In the first episode, when Matt came out of prison to visit, the woman Olivia who had met in the bar had already buried each other. Since then, the three clues have gone hand in hand. Even if Lorena, Olivia, and Emma, ​​who seem to have little connection, are also in the same monastery school, the screenwriting skills can be seen.

The use of intersecting multiple montage techniques allows the narratives of the three clues to blend with each other, creating a more contagious look and feel with independent and intersecting shots, making the whole series more exciting.

One of the impressive aspects of “El inocente” is the use of confessional lens language and immersive interaction, which makes each character more distinctive.

There are many ways to express a person’s heart. Either the third-person narrative, conveyed through the perspective of others, or the first-person monologue, and the rarer “Innocent Most” uses the second-person confession. This technique allows The audience is more immersed and more immersive.

Every major character in the series has a second-person confession, explaining each person’s background and inner thoughts in detail, which is rare in suspense dramas. Narratives beginning with “you” are relatively rare even in narrative literary works.

The biggest advantage of second-person confession is that the supporting role is the protagonist. In this description, the person who confesses becomes the absolute protagonist, but this is also to judge the protagonist based on the second person’s position and thinking mode, and its true purpose is to hide the protagonist. This method makes each character more three-dimensional. What we see is not a face, but all about this person.

“El inocente most” is a group drama, there is no absolute protagonist, everyone is the protagonist of their own lives, which is one of the reasons why this show is so good-looking.

Profound theme: the road to self-salvation of three prostitutes and a handsome man

It is the saint who does not make mistakes, and the saints in reality are very rare. Everyone in the play has two sides. There are no pure bad guys and no pure good guys. Even the heinous Special Crimes Police Officer, Aguilar, his good behavior when facing his wife and daughter can still make people move, one side is a devil, the other is an angel, both sides are real existence.

Many people say that this drama exposes the ugliness of men and praises the greatness of women. Because the bad guys in the drama are basically men. In fact, it’s too extreme to look at it this way. It’s not that the bad guys in the drama are all men, but that the men in control are all men. Power makes people greedy, even if women are in that position. .

Emma, ​​Kimi, and Candice are three prostitutes who were toyed with by men, but even if they betrayed their bodies, they did not sell their souls. After they witnessed the persecution of underage girls and their partners being beaten to death, they chose to resist. , Chose self-salvation.

Emma is the leader of the whole incident, and the most complicated person. She is a nun during the day, but at night she turns into a girl and enjoys the fun of men and women, but this does not prevent her from becoming a good person who chooses to die in order to protect her sisters. . In order not to betray Olivia, she left a good skin bag and her soul was redeemed.

Kimi has a deep love for Candace. When she knows that Candace has become Olivia, her heart is full of contradictions. One is happy for her new life, and the other is because of herself. Feeling sorrow and anger at being abandoned, she chose to burn the jade and the stone. But after Olivia blocked the gun for her, she found that she had not been abandoned by the world. Olivia’s flying jump allowed the two who sympathized with the mother and daughter to obtain salvation.

Danny’s father is as full of love and hatred as Jimmy, but the person he hates is Matt who missed his son. He designed a step-by-step trap in order to get Matt to be punished, but in the end he was hiding behind the scenes. Murderer contaminated with blood. But Danny’s mother is full of love and tolerance. She believes that Matt is unintentional. She even regards Matt as her son, and the two have completed each other’s salvation in the warmth of each other.

Matt was a good student who had no power to restrain the chicken, because the woman participated in a fight, but the missed killing of others changed his life. At the end of the episode, when he threw his inmate who had killed himself in the prison to death, no one would blame him. At that moment when it was either you or me, he had no choice.

Everyone has their own secrets. Matt did not confess to his wife what he did in prison, just as his wife would not tell her husband her past if it were not for threats. Deception without harm is not a sin. As long as the heart is filled with love and tolerance, the future is still bright.

Matt and Olivia seem very miserable, but they are the luckiest people in this play, because they not only achieved self-salvation, but also received the forgiveness of those who hated them the most.

The plot design of “El inocente” is very clever. Danny’s father and Kimi who wanted to hurt Matt and Olivia are not really bad guys. The two people who were originally unrelated hired the same two people. The retired police officer and The chaos makes everything out of control, and also allows the lives of the male and female masters to completely merge together.

The biggest slot is that the male protagonist is not as black-bellied as many viewers expected. The first murder is indeed an unintentional mistake. Then the male protagonist’s role feels not three-dimensional and rich enough, in a bad guy. In the drama, the male lead is too simple and still makes people feel a little unsatisfied.

Life is always full of coincidences, days will not be smooth sailing, uphold a kind heart, there will always be a bright spring! 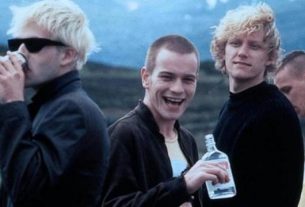 “Trainspotting”: It makes people feel inexplicable before watching, but it has profound meaning after understanding