Marvel’s latest movie “Spider-Man: No Way Home” has risen in popularity. Spider-Man played by Tom Holland and MJ played by Zendaya are loved by many fans.

The couple also showed their true affection for sprinkling sugar in various activities.

Recently, Zendaya posted a photo of Tom Holland on a social platform and called it “My Spider-Man”. Gao Tian Interactive made netizens call “I’m full of dog food.”

“Spider-Man: No Way Home” has received excellent reviews since the lifting of the word-of-mouth ban, and it has set multiple first-day box office records around the world.

“Spider-Man: No Way Home” was called “the best Spider-Man movie so far” by netizens.

Related Post: Spoilers for the plot of “Spider-Man: No Way Home”?

Zendaya shared a photo of Tom Holland and praised each other, and the game interaction between the two is full

Zendaya shared the set photos of Tom Holland in “Spider-Man: No Way Home” on social media and the photos of him wearing a Spider-Man suit when he was a child, and wrote: “My Spider-Man, I’m so proud of you, some things never change and good thing,”.

Her admiration for the Dutch brother is beyond words.

The two recently participated in the show, and when they were playing opinion games, they naturally revealed the wisdom and sweetness of getting along between lovers.

Related Post: The producer of “Spider-Man” has twice advised the protagonist not to fall in love: but no one paid attention to her advice .

Tom Holland tenderly shared his favorite biscuits to Zendaya, but Zendaya handed him the bite bite biscuits because he didn’t like orange filling.

Regarding the view that “London is the best city”, Tom Holland, who grew up in London, chose “Super agree” and whispered to Zendaya, “I’m sitting here!”

When asked “Tom Holland is the best Spider-Man”, the two chose to be neutral with super tacit understanding, and unanimously said, “Let us leave it to the audience to choose, it is not our decision.”

Zendaya said to Tom Holland: “I think there are many great qualities that make you a Spiderman, one of which is that you really like being Spiderman.”

“You have the ability to do everything well enough to make you jealous. When you see you flip, land, fight, do everything, you are really good at it, and you do it easily.”

Netizens commented: “I wanted to see two people arguing because of their different opinions, but ended up having a mouthful of dog food!” “It’s really fun for two people to be together! The aura is getting better and better!”

“Spider-Man: No Way Home” attracted the attention of fans all over the world, and the word-of-mouth hit record at the box office

“Spider-Man: No Way Home” has lived up to expectations and received great acclaim since the global word-of-mouth ban was lifted on December 14.

Currently, the film’s freshness on the Rotten Tomatoes platform is 95%, with an average MTC score of 71, which has been unanimously recognized by film critics and the media.

Many film critics praised the effect of the film for exceeding expectations, and some critics said that “Spider-Man: No Way Home” tells the most fascinating and interesting Spider-Man story to date.

The popcorn of “Spider-Man: No Way Home” started as high as 100%, and the excitement of the fans was beyond words.

Fans expressed that they were moved to tears in the theater and praised it as the “best superhero movie”, and it hasn’t come out for a long time after watching it.

“Spider-Man: No Way Home” has successively landed on big screens around the world, and has been enthusiastically received by movie fans, and the opening box office momentum has been strong.

The film’s box office on the first day in Hong Kong, China exceeded 9 million Hong Kong dollars, and it broke the record for the highest opening day and single-day box office this year.

Its cumulative box office has exceeded the 10 million mark.

“Spider-Man: No Way Home” had a box office of 3.6 million US dollars on its first day in Russia, and the film created the third highest box office in Russian film history.

This achievement is second only to the first day box office of “Avengers 4” and “Avengers 3”.

The box office on the first day in South Korea reached 5.28 million U.S. dollars, creating the best box office since the epidemic. 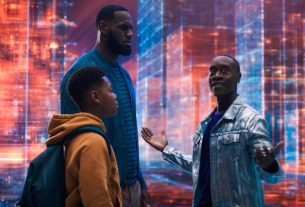 Why did “Space Jam: A New Legacy” choose James