Recently the movie ‘The Witch: Part 2. The Other One’ has been hyped up, some say it’s good, some say it’s bad, but most of them are just following the trend and rubbing it in.

Will the director really re-shoot the script of ‘The Witch : Part 1’.

But any director with a long brain will not be so joking, let alone Hoon-jung Park, who has made the ‘New World’ masterpiece, cut the crap and come to the point.

The first thing to know is that there is a “threshold” for watching ‘The Witch: Part 2.

If you have not seen ‘The Witch: Part 1. The Subversion’ directly watch ‘The Witch: Part 2. The two heroines fly to the sky, a fist can break half the earth, but their superpowers where they come from, and who are the various forces.

So, here’s a quick run-through of The Witch series from the beginning.” The story of “The Witch” begins with the opening credits of ‘The Witch: Part 2.

A Korean branch laboratory personnel of a mysterious head office, hijacked a school bus and kidnapped the students inside, for what? To take them for human experimentation.

This school bus is missing, parents are not anxious?

Anxious, but the entire bus was faked to look like a car accident with one body inside, so there is no hope for this group of students to be saved.

Among the many students, one got pregnant because she slept with the senior’s the day before, and it was this pregnancy that changed her life completely.

In the laboratory, she gave birth to twins, the two heroines of “The Witch” story, Goo Ja-yoon and her sister.

Immediately following is the story of ‘The Witch : Part 1. The Subversion’, in which sister Goo Ja-yoon storms off in the lab.

She is not without reason, the Korean branch of the human experiments are beginning to bear fruit, but the top management of the head office worried about the inability to control these “super-powered people”, so start the removal program.

Goo Ja-yoon escapes to a farm and meets his adoptive parents.

In ten years, Goo Ja-yoon has grown from a little doll to a big, pudgy girl, living a carefree life under the care of her adoptive parents.

You say that such a dangerous “object” out of wandering, how can the head office can rest assured that the head of Doctor Baek, ten years have been looking for her, but always no whereabouts, finally ……

I discovered Goo Ja-yoon on a national variety show.

In order to get money for her mother’s treatment, Goo Ja-yoon participated in a variety show, and you call her stupid? Rushing to expose herself?

That’s not really the case.

Doctor Baek is very resourceful and sends his men to the farm several times before arranging for them to take Goo Ja-yoon back to the lab.

The Witch : Part 1. The Subversion’ super power battle all happened in the laboratory at the end of the film, the heroine Goo Ja-yoon’s super power also got a super outbreak, fist to flesh, fierce and unusual violent aesthetics, the thief handsome.

The funniest thing is that you think it took Doctor Baek ten years to find Goo Ja-yoon?

No, it was actually Goo Ja-yoon who took the initiative to reveal herself. From the beginning, she never lost her memory, but pretended to lose her memory and deliberately hid her identity.

Goo Ja-yoon has been researching her illness since she was a child, but when the doctor tells her that she doesn’t have much time left, Goo Ja-yoon starts her own “exposure trap”.

It looks like Doctor Baek found her, but it was actually Goo Ja-yoon who told Doctor Baek to find her.

At the end of ‘The Witch : Part 1. The Subversion’, Goo Ja-yoon alone destroys the lab and kills a bunch of super-powered people, and a brief cure is found for a seemingly insurmountable disease.

At the end there is a big egg, Goo Ja-yoon managed to find Doctor Baek’s twin sister and informed her that she is no longer worried about her physical illness and has a score to settle with her.

The Witch: Part 2. The Other One’ begins with the destruction of another laboratory.

But this time, unlike the previous ones, ‘The Witch : Part 1. The Subversion’ in which Goo Ja-yoon belongs to the violent escape by himself without any help, ‘The Witch: Part 2. The Other One’ is played in the normal order.

Goo Ja-yoon arranged for his supermen to rescue his sister, but instead of rescuing her as requested, the supermen slaughtered all the supermen in the institute.

Goo Ja-yoon’s sister is the one who survived, ignorantly, from the ramshackle laboratory. For the first time, she is exposed to the outside world.

Same as Goo Ja-yoon, she met a kind family of siblings who took her to eat and drink and were kind to her.

Let her experience a particularly happy time, the second episode, many times mentioned the word mutation, which is why the second episode inside the superpowered people, look very powerful, at every turn a flight of fancy, extinguish the sky and earth.

There are two groups of people inside the villain this time, but the real battle is considered a wave, that is, the small team of disobedient Goo Ja-yoon.

They claimed to have run away from the Shanghai Institute and their goal was to kill Goo Ja-yoon’s sister.

Another wave of people belong to Doctor Baek sister, they are only responsible for the extermination of superpowered people, the ability to reach the place, never hurt the innocent.

The biggest gimmick is Jong-suk Lee’s team, and it is clear that they are also superpowered people and know Doctor Baek.

Unfortunately, their appearances were too short and they didn’t fight at all. Jong-suk Lee’s footage added up to just over 10 minutes, I think.

When Goo Ja-yoon got down from the car, she thought there would be a summit showdown with her sister, after all, Goo Ja-yoon’s aura is so powerful, but it was reconciled.

Everything is paved to their mother, the end of The Witch, on the next one.

Overall ‘The Witch: Part 2. The Other One’ movie, not as bad as said, if you believe only one-sided reviews, then there is probably no good movie.

If you have not seen The Witch series, from ‘The Witch: Part 2. The Other One’ alone, then the probability will say it is very poor, after all, can not read, many stories and ability settings can not be connected.

The Witch : Part 1. The Subversion”, and then you will feel as I did, that it is good and worth a second brush.

Related Post: ‘The Witch: Part 2. The Other One’ Review: The plot, action scene, and acting are not as good as the previous one. 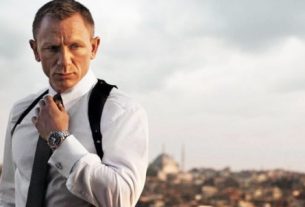 Daniel Craig: After ‘Casino Royale’ I was told at least four more films