If you talk about the most watched Hollywood science fiction blockbuster this year, it can be said that it is none other than “Dune”.

Now that the film is scheduled to be released on the mainland on October 22, Chinese fans can finally feast their eyes on the big screen.

“Dune” is adapted from the classic sci-fi IP of the same name written by Frank Herbert.

Over the past half-century, this IP film adaptation, “Dune” has consumed the efforts of generations of Hollywood filmmakers but has been unable to deliver a perfect answer.

Therefore “Dune” is considered “a novel that cannot be adapted into a movie”.

Until this time, Denis Villeneuve shot.

“Dune” currently has a freshness of 88% of rotten tomatoes, and its IMDb score is as high as 8.7.

Judging from the reputation of the film, this annual sci-fi giant did not disappoint the original fans, movie fans and film colleagues for half a century of expectations.

Today, I have compiled a detailed hardcore popular science post, from the origin of the creation of “Dune”, the story setting to the adaptation process, there are detailed interpretations.

In the book, Carson described the ecological problems caused by products such as the pesticide and insecticide DDT, warning people of the huge threats to humans caused by environmental degradation.

This work sparked intense discussion in American society, which eventually prompted the US government to pay attention to the problems caused by pesticides, and therefore the Environmental Protection Agency was established.

“Silent spring” not only became the starting point of environmental ecology, but also allowed more science fiction writers to focus on the huge impact of ecological changes on mankind.

In 1957, the unknown American writer Frank Herbert was invited to write a reportage about a scientific experiment conducted by the United States Department of Agriculture, using grass to stabilize the destructive spread of sand dunes to solve the problem of soil erosion.

Frank Herbert after studying and visiting , he found that the expansion of sand dunes was enough to swallow the cities, rivers, and highways where humans live.

This subversive power gave Frank Herbert a huge inspiration. He wanted to tell a story that happened on a planet that had been swallowed by sand dunes.

This reportage is the prototype of “Dune”, one of the greatest science fiction novels of the 20th century.

The birth of “Dune”

Frank Herbert’s ambitions are also expanding rapidly like a sand dune. He intends to expand the manuscript at hand into a novel, but it backfired.

After immersing himself in writing for a few years, the original version of “Dune” was rejected by more than 20 publishers.

It was not until 1963 that “Dune”‘s short soft science fiction “Dune saga” was officially published.

Frank Herbert set the background of the story on the planet Elakos thousands of years later.

On this planet called “sand dunes”, the desert covers most of the land and there is almost no precipitation.

There is a serious shortage of water resources, and sandstorms threaten the survival of human beings and all things-except for sandworms with huge bodies buried under the sand dunes.

After building such a hellish ecological environment, Frank Herbert set this place as the most important resource in the universe-the only place where spice is produced.

This spice is not a spice that we generally recognize. As a resource, it can not only extend human life and improve intelligence, but it is also an indispensable energy source for interstellar travel.

In short, this is an indispensable resource for all forces in the universe, and it controls the struggle and change of the entire galaxy’s regime.

These designs of Herbert, it is easy to find the corresponding in the real world.

In the novel, many vocabulary and ideas are close to the concepts of the Arab world.

The story line of a military rebellion led by a foreigner to a desert civilization is also easily reminiscent of the classic film history “Lawrence of Arabia”.

And the prototype of spice, and the struggle it ignited, are not like oil in the real world?

Once the novel was published, it caused heated discussions in American society.

“Dune” won the 1965 Science Fiction Highest Award Nebula Award for Best Novel. It has been translated into dozens of languages ​​and sold 20 million copies worldwide.

The success of the first part was only the beginning, and Herbert did not slow down because of this, but continued to tell the story of what happened on the desert-covered planet.

The movie version of “Dune” released this time is adapted from the first half of the first novel.

The young Paul Atreides, played by Timothée Chalamet, is the protagonist of this movie

They continue to tell the story of Dune Planet thousands of years later.

In addition, the “Dune” series has also produced many derivative books such as rumor, prequel novels, and encyclopedias in the background of sand dunes.

So far, “Dune” has become the best-selling and most important series in the history of science fiction.

And with global warming, soil desertification, water shortages and oil crisis, “Dune”‘s foresight makes it more radiant than when it was first born.

The story of “Dune” takes place 4,000 years later. Human beings can travel freely through the interstellar space by traveling faster than the speed of light.

Fearing the growing power of Duke Leto Atreides, the emperor decided to use the hands of others to get rid of this confidant concern.

Leto Atreides had a long-standing grievance with another baron, the Harkonnen family.

And Arrakis, the planet that produces the spice mentioned above, is the sphere of influence of Baron Harkonnen.

The emperor ordered Duke Leto to move his territory to Arrakis, and Baron Harkonnen was naturally unwilling to give up control of such core resources.

Knowing that there was a fraud, Duke Leto went to the planet Arrakis with his family.

In this conspiracy, Duke Leto committed suicide after being captured.

Leto’s only son Paul and his wife Lady Jessica managed to escape and went deep into the desert center with the help of Fremen, a native of Arrakis.

Many loyal ministers of the Atreides family were captured, some were helped by other forces, and more were killed.

After his father was assassinated, Paul shouldered the dual mission of revenge for his father and the restoration of the country.

He changed his name to Paul Muad’Dib, and after integrating into Fremen’s culture and life, he gradually grew into a leader here.

Later, he married Chani, the daughter of Dr. Liet-Kynes, the spiritual leader of the aboriginal people.

Jessica was also revered as the Virgin by Fremen, and gave birth to Leto’s posthumous child and Paul’s sister Elia.

Elia can talk as soon as she is born, and has terrifying superpowers…

“Dune” is an epic about the growth of a person into a hero. The original author Herbert’s brushstrokes do not fall solely on the concept of interstellar aircraft and science fiction.

Unlike most superheroes in American pop culture, although Paul is talented and intelligent, he has received good education and training, but he has gone through many hardships to become famous.

It can be said that the entire story of the “Dune” series revolves around the power struggle of the Otredi family.

Its story can be set in any era, but it happens to happen in the future, on the planet Erakos where the sand worms shuttle.

The difficulty of “Dune” film and television

Soon after the first novel of “Dune” was published, it attracted the attention of many producers and directors.

But its film and television adaptation road is like the sandstorm of Arrakis star full of thorns.

In the next half century, only two feature films were produced.

One is “Dune” filmed by David Lynch in 1984, and the other is the upcoming Denis Villeneuve version.

Producer Arthur P. Jacobs obtained the copyright of his film and television adaptation as early as 1971.

The original “Dune” project was directed by David Lean, director of “Lawrence of Arabia”.

But Arthur P. Jacobs passed away two years later, and the copyright was acquired by a French consortium.

With the support of the consortium, Alexandro Jodorowsky, the Chilean ghost director who filmed “The Holy Mountain”, took over “Dune”.

He embarked on an ambitious plan.

The film is starred by the famous surrealist painter Salvador Dalí as the emperor, “Citizen Kane” director Orson Welles as the Duke of Harkonnen, the lead singer of the Rolling Stones Michael Phillip “Mick” Jagger as Feyd-Rautha Harkonnen, and David Carradine as Leto.

Interestingly, Jodorowsky arranged for his own son, Brontis Jodorowsky, to play the actor, Paul Atreides, the soul of the entire “Dune” series.

Not only that, Jodorowsky also plans to invite “Father of Alien” Hans Rudolf Giger as the art director. The legendary rock band Pink Floyd and the French avant-garde rock band Magma will come to sound the film.

The behind-the-scenes story of this collapsed movie was brought to the screen instead.

A documentary called “Jodorowsky’s Dune” was launched in 2013, and friends who are interested can check it out.

After that, the film and television rights of “Dune” were acquired by Italian producer Dino De Laurentiis.

Herbert personally participated in the adaptation of this version of “Dune” script, and the famous director Ridley Scott joined.

But Ridley Scott is now thinking about another sci-fi project “Blade Runner”.

The slow production process of “Dune” frustrated him, and finally reluctantly quit.

Laurentiis approached David Lynch, who even though he hadn’t read the novel at all, eventually took over the huge project.

But things did not go as smoothly as he expected.

After two years of preparation, the David Lynch version of “Dune” was shot in a huge studio in Mexico. The original rough cut version lasted 4 hours.

Laurentiis and Universal Pictures hoped to control the film length to about 2 hours, while Lynch wanted a fixed cut version of 3 hours, and the two sides were in a stalemate.

In the end, the powerful producer’s routine against the director’s will was staged again.

The edited version led by Laurentiis deleted a lot of the original scenes, and made up a brand new picture, and the plot was simplified.

He also superfluously used voiceovers to supplement the narrative.

He printed it on the film under Alan Smithee, the “code name” that Hollywood directors usually use when they refuse to sign.

In the end, this not-so-perfect “Dune” won a good box office.

But the critics sneered at it. The media was full of words like “ugly”, “empty”, and “worst of the year.”

Such a failure made the critics believe that “Dune” may be one of the most unsuitable science fiction novels for the screen.

In the following 20 years, no studio in Hollywood wanted to start with “Dune”.

Only Paramount planned to bring it to the screen again in 2008, but it didn’t happen.

Until recently, Director Denis Villeneuve took over this hot potato.

In addition to movies, the drama version “Dune” currently also has a popular version.

The American science fiction channel Syfy launched a three-episode miniseries of “Children of Dune” in 2000.

It tells the story of Paul’s son and daughter Leto II.

But the bad special effects of this version can’t show the grand epic sense of “Dune”.

Finally, I want to say that in “Blade Runner 2049”, director Denis Villeneuve has shown his ability to control science fiction and a highly recognizable author style.

Everyone is quietly looking forward to the advent of this truly adult-oriented space opera, witnessing the birth of a hero on the planet Arrakis in the depths of the universe… Can these behind-the-scenes teams save the show “Love, Death & Robots Season 3”? 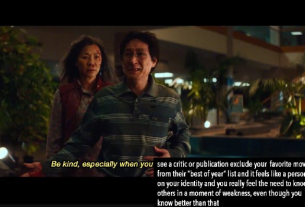 Dan Kwan, co-director of ‘Everything Everywhere All at Once’, urges fans not to be overprotective