The “Escape Room 2” I’m going to talk about today not only has the no peeing points of the previous game, but also upgraded the levels to enrich the process of understanding the mystery.

I have to say that this year’s sequels are very vigorous, not only following the excitement of the predecessor, but also having corresponding upgrades.

The taste of “Escape Room 2” is similar to that of the first one. It is more and more similar to the PG-13 version of “Saw Cry”.

The film has more terrifying puzzles, more action scenes, more investment than the first one, and more CG special effects.

The rhythm of “Escape Room 2” is very tight.

It is very short, only 88 minutes.

But even so, “Escape Room 2” is over before you know it.

Once the action starts, it will not relax.

These movies are almost like a mix of horror and action movies, and I think this is one of the reasons they work well.

People who like horror can enjoy the action elements well, and those who don’t like horror know that this movie will not scare you or make you sick at all.

However, because “Escape Room 2” pursues a thrilling and tense rhythm, the puzzle-solving process of the characters is a bit easier.

The design and solving ideas of some puzzles are not convincing enough to withstand scrutiny, but they are not a major problem.

This is a common problem with puzzle-solving movies.

“Escape Room 2” is still taking the first small-input and high-output route, and the actors are new faces who have not entered the stream.

The story scenes are still mostly indoors, and they are movies that can be completed in the studio.

Due to the high cost performance after the release of “Escape Room”, investors have obviously increased their investment in “Escape Room 2”, making the visual effects of the sequel better than the first one.

“Escape Room 2” sets up two villains, one in the light and one in the dark.

Because she is the cold-faced heroine of “Orphan”, her looks must be the villain.

Therefore, the director’s selection of the female villain is wrong, and an actress who has a weak appearance and can mislead the audience should be chosen to play the role of the male villain’s daughter.

Interestingly, the beginning of “Escape Room 2” has the first summary of the situation, and it is longer.

This can remind the audience of the plot of “Escape Room” and can serve as a pavement for audiences who have not watched the first part.

The previous situation summary is very friendly to passers-by and the audience.

This approach is very similar to the foreword of a TV series, but it is relatively rare in the movie sequel, especially the longer foreword of “Escape Room 2”.

Although “Escape Room 2” amplifies the film layout with these secret rooms, it strengthens the sense of oppression that the entire film can bring to the audience.

But the director has not forgotten the plot and role management.

Just like the “Escape Room 2” contestants are all “survivors” who have survived escapes in other rooms.

“Escape Room 2” also focuses the story on victims who have suffered trauma.

Through the psychological shadow they cannot eliminate, the theme that “Escape Room 2” wants to convey is brought out.

The ending of “Escape Room 2” can actually be very clever.

Although this time the protagonists once again successfully escaped from the secret room using “unconventional” methods, and made the existence of this secret room public, allowing the police to investigate it.

But in the end, this was only “Minos Corporation” expected.

It can even be said that “Minos Corporation” deliberately guided it towards this result.

This is just to make the protagonist Zoey think that they have been sanctioned, and get on the plane’s pre-operation plan for the “game spindle”.

I believe that there is such a suspense at the end, which has aroused the high expectations of the audience for the sequel of “Escape Room 2”. 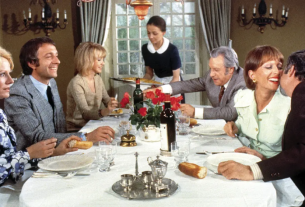