Every horror fan loves to be scared because that’s what horror movies are supposed to be about. But when the plot involves a child abductor wearing a scary mask and some supernatural phenomena, the story may take a bit of a different turn. Can Scott Derrickson’s new horror ‘The Black Phone’ overcome the tried-and-true horror movie formula and offer audiences something they’ve never seen before? Or is it just another generic retread of past horror films?

Scott Derrickson’s horror films generally have a horrific nightmarish overtone, but the film may be so driven by fantasy that it fails to penetrate the viewer’s heart.

Ethan Hawke has never played an outright psychopathic villain in 30 years, but in ‘The Black Phone’ he plays a serial killer, a psychopathic lunatic who lives in a dirty basement and whose mask makes you look panicked and scared.

Hawke plays a character known as ‘The Grabber’, a man who specializes in kidnapping teenage boys and doing unspeakable things to the kidnapped boys.

He drove a black 1970s van, donning a magician’s hat and leaving some black balloons at the scene whenever he jumped out of it and dragged his victims into it.

Hawke plays this evil character and is one of the main attractions of ‘The Black Phone’.

A good serial killer movie often needs a dark mystery, but when Hawke appears in ‘The Black Phone,’ the audience may recognize him instantly and the mystery may be lost, requiring his brilliant acting to make up for the absence of relevance.

With his father an alcoholic and almost all of his friends taken by the psychopathic murderer known locally as ‘The Grabber’, Finney thought it was only a matter of time before he was taken.

Most of the film’s plot takes place in the monotonous basement where Finney is held by a masked ‘The Grabber’.

He would occasionally show up, drag Finney out of the basement, and make some vague threats.

There was an old black rotary phone hanging on the wall, and although the cord was cut, it kept ringing. Finney answered the phone, realizing that the voices were those of the boys who had disappeared ahead of him.

They guide Finney through his previous experiences, giving him coping skills that will hopefully allow him to survive the clutches of The Grabber.

This is not only for Finney, but also for them.

Mason Thames gives an extremely realistic performance as the young Finney, and the scenes are filled with a sense of dread when he is alone in the basement with the ghosts.

The unsaturated colors and grainy, dreamy scenes give the film style a retro feel, even to the fear of child abductors.

At the beginning of the movie, The Grabber is depicted as a twisted psychopath. A man who enjoys playing mind games with his victims and revels in their torture is chilling to watch.

But as the story unfolds, one can’t help but marvel at Ethan Hawke’s brilliant performance. Although the masked killer rarely speaks, Hawke effortlessly takes on the role of The Grabber, constantly teasing his victims into showing some meaningless resistance.

Although ‘The Black Phone’ has a very good backstory, it’s not a frighteningly realistic serial killer movie like ‘The Silence of the Lambs’, but more of a closet horror film driven by a lot of fantasy horror.

The elements of “it” and “weird stuff” establish the direction of the film, which feels like a dark cousin to the comic book world, with a story driven by supernatural elements.

Finney becomes part of a fraternity of victims and, although a bullied child, learns to fight back with the help of some supernatural forces.

‘The Black Phone’ is not a perfect movie, in fact, without Hawke’s wonderful performance, the film would probably not be worth seeing. The film’s retro 70s vibe is memorable, and of course the actors are excellent.

It certainly doesn’t have the groundbreaking elements of a horror film; where the film really shines is with a large cast of great actors, and a talented director. He pulls the viewer back to the 70’s to meet a new child killer.

For that reason alone, ‘The Black Phone’ is also worth seeing. In an era filled with superheroes, dinosaurs and ghost hunters, it’s refreshing to see a retro villain stand out in a chilling way. ‘The Time Traveler’s Wife’ Review: A good movie where sci-fi and love are intertwined 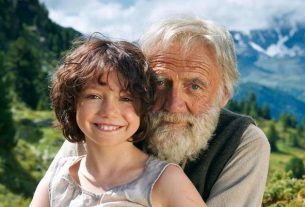