In 1958, Japanese cartoonist よこやま みつてる used a paintbrush to create a steel behemoth with a height of 18 meters, a weight of 31 tons, and an output of 100,000 tons of horsepower-“Tetsujin 28”.

The birth of Tetsujin 28 created a precedent in the “Robots” culture that became popular around the world half a century later. They are manipulated by humans, with great sci-fi design and mechanical beauty, and are extremely attractive to male audiences. Therefore, there is a saying that “Robots is a man’s romance”.

With the development of CGI technology, robots are no longer limited to comics and animation, they have become more realistic and closer to reality, and they have begun to interact with real actors.

In 2011, a Hollywood blockbuster combining robots elements and sports cores came out, exciting mecha fans around the world. This movie is a sci-fi masterpiece produced by DreamWorks and released by Disney—(Real Steel).

The film is directed by the director (Shawn Levy) of the “phenomenal” American drama “Stranger Things” and starred by “Uncle Wolf” (Hugh Jackman). The cast is good.

The film was nominated for “Best Visual Effect” at the 84th Oscar. 10 years later, it still maintains Douban’s excellent score of 8.2 points, better than 94% of sci-fi action movies. It is full of gold and is worth watching.

The time of the story is set in 2020, which is emptied. At that time, the boxing sport no longer allows humans to participate, and it is all done by high-tech robots.

Before the implementation of this sports rule, Charlie played by Hugh Jackman was also the second-ranked boxer in the world.

The iron law of helplessness is now, the once famous boxing champion is no longer, so I have to adapt to the times and train my robots to fight and compete.

In a 2,000-pound robots match, Charlie’s robot lost the game and lost the title. Since then, his life has also begun to become impoverished, with high debts.

At a moment of frustration in life, Charlie accidentally received the news of the death of his ex-wife. The 11-year-old boy Max, who was abandoned by him, also entered his life.

Charlie and his son Max

One is a son who has no father’s love since childhood, and the other is a free and loose father. When meeting again, there will be estrangements and conflicts, but after all, blood is thicker than water.

Encouraged by his son Max, Charlie decided to step out of the haze of the last failure and once again set foot in the boxing ring of robots for hegemony.

The dream for the father and son is realized by an old-fashioned sparring robot-Atom that was unwittingly dug out of the trash.

Treasure dug out of the garbage

The Atom model is old and obviously not suitable for the current fast-paced competition. Charlie was not optimistic about it from the beginning, but his son’s repeated insistence impressed him.

Having said that, Charlie is now impoverished, where can he buy new robots with his spare money? Old Atom is his only choice at the moment.

What are the characteristics of the sparring robot? Peshi anti-beaten! Grasping this point may have unexpected results.

Atom has a function called “Shadow Follower”, which can imitate various actions made by human controllers. This seemingly inconspicuous function has become its future killer.

After a simple modification, the father and son took the Atom to the arena. In the process of running in the robot, Charlie and Atom’s feelings are also quietly running in.

Without actual combat experience, Atom is often beaten to “seeking for iron” and losing streak in a row. Under Max’s suggestion, Charlie passed on his lifelong boxing technique to Adam through the “Shadow Follower” function.

At the same time, Charlie’s voice control and other modules have also been upgraded. High-tech, solid body, and personal teaching from the former second boxer in the world are enough to make Atom make a difference in the ring.

The programming of the machine is dead, and the human response is alive. With the blessing of Charlie’s boxing skills and his real-time voice guidance from the audience, Atom has been reborn and won many battles.

Overnight, Atom’s name spread throughout the Robot fighting circle. This soft persimmon, which was once crushed by people, has now become a hard rock.

With his own steel boxing, Atom was invincible all the way, winning consecutive times, and finally entered the professional robot league.

While it gained the attention of everyone, it was also targeted by people with ulterior motives.

What Atom is about to challenge is the undefeated myth of the “World Robot Boxing Federation” (WRB)-Zeus.

As the defending champion of the Robot Boxing League, the strength of the boss behind Zeus cannot be underestimated. The appearance of Atom made her feel a little uneasy, and she would never leave any worries about raising tigers.

On the day of the final, Zeus crushed Atom with absolute advantage. Under the attack of the iron fist, its voice module was broken. Without Charlie’s command, Atom is only left to be beaten.

Seeing this situation and scene in front of him, Charlie seemed to have returned to the age when humans were sweating blood and sweat on the ring. When he couldn’t do anything about it, he had to rely on Atom’s “Shadow Follower” function.

Under the ring, Charlie waved his fist, dodge, block, and attack in one go. On the ring, Atom imitated Charlie’s actions, avoided Zeus’s attack, blocked its iron fist, and began to counterattack.

As Charlie jumped, a punch fell and the game ended. At this moment, the declining boxer has regained the confidence of the past, and the undefeated Zeus has become the legend of yesterday…

As a sci-fi movie that integrates robot elements, sports competitions, and father-son family affection, Sean Levy’s “Real Steel” has a high degree of completion, and the overall look and feel are in place, giving people a hearty heart. The movie viewing experience, or enjoyment, is worth seeing. 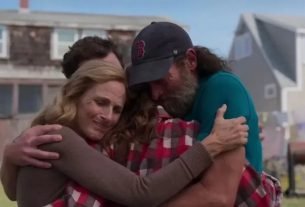 “CODA”: Love is the truth of family fetters “Tick, Tick…Boom!” review: Showing the will and vitality behind the creator