Twenty-six years ago, on December 15, 1995, the breathtaking and tearful sci-fi adventure comedy “Jumanji” was released in North America.

The scene where elephants, zebras and monkeys rushed into the city, stomped on cars, and rammed into the city. The dumbfounded scene of the children has become a big-screen fond memory of many people’s childhood.

At that time, the smiling Robin Williams hadn’t “encountered” Ben Affleck and Matt Damon in “Good Will Hunting”.

Kirsten Dunst just shined in “Interview with the Vampire: The Vampire Chronicles” and “Little Women”. After becoming a “Spider-Woman”, it will take a few more years.

“Jumanji” is the name of a board game in the film.

Its game rules are very scary: once the game starts, no matter what happens, the rules must be followed and the game must be finished.

In 1969, the little boy Alan who played chess with the little girl Sarah disappeared from the real world and was trapped in the world of chess.

When you accidentally roll the dice, let the grown-up Alan (Robin Williams) return to the real world.

They can only find Sarah (Bonnie Hunt), who is also an adult, and we will continue Alan’s game together…

After the film was released that year, with a budget of $65 million, it earned a global box office of 263 million.

According to his interpretation, the word “Jumanji” means “many effects” and refers to the various “interesting” consequences of playing chess in the movie.

Later, Peter Garber of Sony Pictures went to Boston to visit him, hoping to adapt the book into a movie.

Chris Van Allsburg wrote a version of the movie script himself, in his own words, “incorporates mystery and surrealism into the story.”

He later revealed that if it weren’t for the fact that his script was written too well and added a lot of content that was not in the book, Sony would almost give up adapting the book.

TriStar requested that only Robin Williams came to play the leading actor, they would agree to invest.

As a result, Robin Williams rejected the role of “Alan” in the film after reading the first version of the script.

A total of 4 screenwriters, including director Joe Johnston, later rewritten the script many times, and Robin Williams finally accepted it.

At first, Joe Johnston was a little hesitant about choosing Robin Williams. The first candidate in his mind was Tom Hanks, because Robin Williams liked to act and improvise.

But Robin Williams said that he understood the story as “very tightly structured” and completed his performance completely in accordance with the script.

He usually plays the same scene again with the heroine Bonnie Hunt after performing the script once.

Dwayne Johnson, Kevin Hart, Jack Black, Karen Gillan and others have acted as a complete comedy.

The film is also considered by fans to be the true sequel to “Jumanji” in 1995.

The previous 2005 “Zathura: ASpaceAdventure” (Zathura, also a strange word) does not count.

This 2005 “fake sequel” film directed by Jon Favreau and starring Kristen Stewart and Tim Robbins (“Iron Man” and “Twilight” will only be available in 2008).

Although it is also adapted from the original author Chris Van Allsburg’s novel “Zathura” of the same name.

However, the film “Jumanji” is not mentioned at all, but the concept is similar to it.

In 2017’s real sequel “Jumanji: Welcome to the Jungle”, “Alan” played by Robin is mentioned, and it is also a tribute to v who has passed away.

In “Jumanji: The Next Level” two years later, Bebe Neuwirth, who played the role of Judy’s aunt Nora in the original “Jumanji”, also returned as a cameo at the end.

Nora is the only character at the end of the original movie who did not explain the ending of the role, and her story is finally completed in the new sequel.

Speaking of the original film, Bonnie Hunt and Kirsten Dunst later recalled that they both liked working with Robin because he would make everyone on the set laugh.

He also likes to imitate Jodie Foster in “Nell” (1994), which is Kirsten Dunst’s favorite repertoire.

Back then, “Black Widow” Scarlett Johansson also came to audition for the role of “Judy”.

However, it was eventually won by Kirsten Dunst, because it was still 8 years before Scarlett was famous for “Lost in Tokyo”.

As a comedian, Robin always likes to joke with people.

When someone asks what his title “Jumanji” means (it must be asked by those who have never watched the film), he usually tells people, “This is the name of an island in the Caribbean Sea. If you want to go, you can go early. Book a ticket!”

Once on a talk show in the UK, Robin recalled that when he was acting in a scene where he was fighting a crocodile, he was too entertaining, forgetting that there was a person wearing special clothes in the crocodile.

He smashed the crocodile with his elbow and heard a dissatisfied “Hey!”

However, the crocodiles, piranhas, giant mosquitoes and the like in the movie are really scary. Even Robin himself refuses to let his children watch this movie.

Many film critics also feel that the PG rating of the film is a bit too low and should be changed to PG-13.

Roger Joseph Ebert specifically pointed out that for children, this film is very unsuitable like “Jaws” (but in fact, “Jaws” is also a PG…).

Jonathan Hyde plays two roles in the film, playing Alan’s father and hunter (did you recognize it back then?).

This is very similar to the big screen tour of “Peter Pan”-George Darling (Wendy’s father) and Captain Hook are both acting alone.

Coincidentally, Robin played the role of Peter Pan when he grew up in “Hook” (1991).

When he was filming “Jumanji”, he was also filming “Nine Months” by Chris Columbus, in which he played a small supporting role.

At that time, the special effects production method of “Jumanji” was relatively traditional, and Industrial Light and Magic was responsible for the digital special effects part of the film.

Can draw real facial expressions on animal faces made by CG, and make realistic digital hair.

This function is mainly used on monkeys and lions.

Bradley Pierce, who plays Peter, was only 13 years old and had to paint 3 hours of makeup every day, sticking monkey hair on his face.

This process lasts for 20 days, but Bradley himself likes this process.

When filming the scene of a rhino crossing the street, the crew brought in a hydraulic cylinder to let the steel rhino pass through the wall of the library. In the later stage, the steel rhino was replaced with a group of animals using CGI technology.

There were also rumors that an elephant died unfortunately during the filming of this animal scene, but this is completely a rumor!

At the time of the filming, no real animals were used, and they were all made by CG.

The monkeys wandered the street and stopped to see the movie in the street video store, which was the scene where the flying monkey attacked in “The Wizard of OZ”.

Robin concluded that to make such a film full of CG special effects, you need to play against the air and pretend that the opposite is an animal.

“It’s especially like knocking down the hallucinogen, because everything has to be imagined out of thin air.”

However, there were also thrills during the filming process. While driving, a stand-in actress lost control of the car and ran into a tree at a speed of 60 miles. Fortunately, she was okay.

Director Joe Johnston prayed one by one to photograph the paparazzi of the accident, hoping that they would not report the accident.

“Jumanji” was mainly filmed in the small town of Keene in New Hampshire (near Massachusetts).

The virtual town of Brantford where the story takes place in the film is set here.

but! What’s interesting is that there are all kinds of animals in the film, but there is no zoo in this whole state.

The people in this town like Robin and this movie so much. The mayor gave Robin a bunch of keys to the city in 1994.

The logo of the “Parrish Shoe Factory” run by his father “Alan Parrish” is still on a wall in the town until now.

In 2014, after Robin’s death. Local residents placed flowers and candles under the logo of the shoe factory, and also held a “Jumanji” screening event to commemorate the event.

The scene of the Christmas party at the end of the film was filmed in Vancouver, Canada.

This place is not as cold as other cities in Canada in winter, and the climate is similar to that of nearby Seattle, and it rains easily.

The crew of “Jumanji” shoveled snow from the mountain and transported it to the studio.

“My father is a bit harsh and very elegant.”

But in his opinion, the rift between Alan and his father would make him think of his grandfather and grandfather even more.

“My father is particularly good because he will never force me to do anything. Because what happened to him in his early years, he doesn’t want to repeat it to me.”

At the end of the movie, after living alone in the chessboard world for more than 20 years, he finally returned to Alan in the real world and returned to his childhood.

He looked at his father, whom he hadn’t seen for many years, at this moment, the father and son finally reconciled. 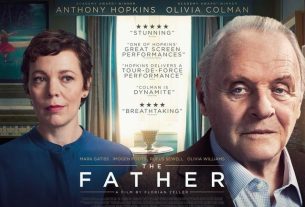 “The Father”: the true state of patients with Alzheimer’s disease “Marry Me” Review: The music diva randomly finds fans in the audience to get married, and the film’s subject matter is novel and interesting