According to media reports, in the opening 15 minutes of “Spider-Man: Across The Spider-Verse (Part One)”, which was released at the event, the stage of the story was set in “Universe 65”, Spider-Man Gwen Meet Spider-Man 2099 (Miguel O’Hara) from another universe and a pregnant Jessica Miriam Drew (Spider-Gwen) fighting Vulture.

During the fight, a helicopter was shot down and a helicopter fell from the sky, with Gwen and Spider-Man 2099 using their nets to prevent the fall and cause further damage.

Afterwards, Gwen met her police father, to whom Gwen argued that she did not murder Peter.

Do you really think I’m a murderer?

I am your daughter.

The camera jumps to the universe of “Spider-Man” Miles Morales. Miles is in talks with his family and the president of Columbia University. Miles wants to apply for a physics class to develop a multiverse jump project.

At this time, his “spider sense” was triggered, Miles excused to leave, and the president of Columbia University told Miles’ mother: “Your son is lying to you. I think you know it.”

According to Phil Lord and Christopher Miller, creators of “Spider-Man: Into the Spider-Verse‎”: “This sequel is much bigger than the first. It has the largest team in animation history (1,000 artists) ).”

The sequel will feature 240 characters, much larger than the 40 of the first, and will span six universes.​​​​

At the end of the recommendation meeting, the official release of the sequel “Spider-Man: Across the Spider-Verse (Part Two)”, the sequel will be officially released in 2024.

Related Post: “Spider-Man: Across The Spider-Verse” is rumored to be much bigger than the first, with 240 characters and six universes. 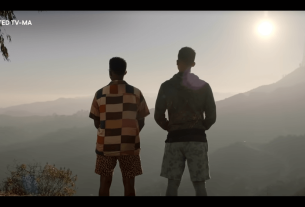