After a few weeks of continuous fire, the Northern America movie market cooled off last weekend, with the new DC animated movie ‘DC League of Super-Pets’ taking the top spot, but opening with only $23 million at the box office.

The Northern America market accumulated over $1 billion in July this year, the first time since the epidemic that the box office broke $1 billion in a single month, and the heat is basically back to normal.

A24’s small-budget film ‘Everything Everywhere All at Once’ was re-released last weekend, and its cumulative worldwide box office exceeded $100 million, a record for the company.

‘DC League of Super-Pets’ opened at the box office far worse than the last DC animation ‘The Lego Batman Movie’ of $53 million, even lower than ‘The Bad Guys’ of $24 million.

‘The Bad Guys’ Northern America accumulated $96.69 million and $245 million worldwide, and the ‘DC League of Super-Pets’, which invested more than $80 million, was eventually estimated to be at the same level as ‘The Bad Guys’.

‘DC League of Super-Pets’ CinemaScore rating A-, Rotten Tomatoes freshness 72%, Popcorn index 89%, in the ensemble movie performance is not bad.

‘Minions: The Rise of Gru’ got $10.9 million in its fifth week to rank fourth, and Northern America accumulated $320 million and will soon surpass ‘Minions’ final box office of $336 million. This Illumination’s animated film accumulated $710 million worldwide.

‘Top Gun: Maverick’ is in fifth place with $8.2 million in its tenth week, and Northern America has accumulated $650 million and will soon pass ‘Jurassic World’ with $653 million to jump to eighth place in Northern America’s history.

‘Elvis’ opened at No. 7 with $5.83 million in its sixth week in theaters and accumulated $129 million in Northern America and $234 million worldwide. This is the second best performance of director Baz Luhrmann’s career, after ‘The Great Gatsby’.

Plot: Based on the novel ‘Bullet Train’ by Kotaro Isaka, the film tells the story of five assassins on a speeding train from Tokyo to Morioka, who discover that their respective missions are in fact related.

The question then becomes: who will get off the train alive? And what awaits them at the end of the line?

Plot: The story follows a group of friends who play a mock murder game called “Bodies Bodie Bodies” at a remote weekend party, only to have a real murder take place. “The Son‎” will premiere at the Venice International Film Festival 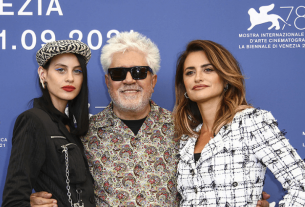