On September 19, according to media reports, “Corsage‎” , a historical biopic written and directed by Austrian filmmaker Marie Kreutzer and starring Vicky Krieps, Colin Morgan, Finnegan Oldfield and others, released a poster for the U.S. version, with the famous “Empress Elisabeth” makes a contemptuous gesture to the camera.

Historically, “Empress Elisabeth” was praised by her contemporaries for her beauty, but in the film, the focus is on her “outlandish behavior” in the stodgy and dull Habsburg court.

In the previously revealed material, “Empress Elisabeth” repeatedly tongue out to the camera, but also hit the table, the public to make indecent gestures, which is also her inner desire to be free and want to escape the constraints of the embodiment.

It is reported that the film is scheduled for release in Northern America on December 23, and will also represent Austria in the competition for Best International Film at the 95th Academy Awards. 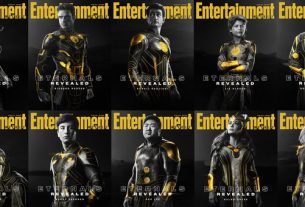 “The Eternals” characters appear on the cover of “Entertainment Weekly”