The Disney+ “Percy Jackson and the Olympians‎” series, adapted from a well-known novel, recently officially announced the protagonist lineup, in which black actress Leah Jeffries will play the heroine Annabeth Chase.

The casting sparked some controversy, though, as Annabeth was portrayed as white in the original novel. The author of the novel, Richard Russell Rick Riordan, recently responded to the controversy with a post, saying that there is no problem with skin color.

“As a writer, I’m well aware that I’m always looking for the best actors to play and give personality to these characters, and looks are secondary to me. Now we do. We spent a year casting and finding The best trio ever. Leah Jeffries is Annabeth Chase.”

He then added: “You’re just judging her suitability for the role based on how she looks. ‘She’s a black girl playing someone who is described as white in the book’ friends, that’s racist.”

Riordan said it could be argued that he was forced, brainwashed, bribed, threatened, etc., to cast a black girl for a white role, but that was completely wrong. “I’ve been emphasizing that the true essence of a character is in their personality. Anyone can be a hero, and Leah brings so much energy and enthusiasm to the character that she’s going to be a role model for a new generation of girls who will be in her. See the hero you want to be.

“If you don’t understand that, if you’re still uncomfortable with the cast of this trio, then you’re reading these books for nothing, you’re not learning anything from them.”

Riordan also accused some netizens of being a cyberbully, “No matter what conclusion you draw from the article, we should all agree that bullying and harassing children online is unforgivable. Although Leah has a strong heart, even though we have discussed The possibility of that reaction and the enormous amount of pressure this role will bring, but the negative comments she’s received online are still out of place. Now these people need to stop this behavior.”

It is worth mentioning that in the movie version many years ago, the heroine Annabeth was played by Alexandra Daddario. Woody Allen revealed that he is considering retirement, perhaps after his next movie 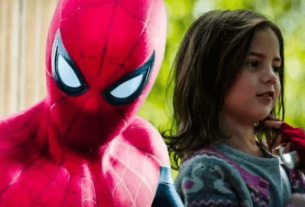 “Spider-Man: No Way Home” may be a wise decision to delete Iron Man’s daughter cameo!