Although the epidemic situation in North America is still severe today, it still seems to be unable to follow in the footsteps of “Spider-Man: No Way Home”.

This Marvel movie, which has assembled three generations of Spider-Man, had already attracted much attention before it was released, and its performance after the release was also very eye-catching.

“Spider-Man: No Way Home” is basically sure to be the annual champion at the North American box office, and its global box office has exceeded 600 million US dollars (equivalent to more than RMB 3.8 billion)

It is conceivable that if it were not for the epidemic, the performance of “Spider-Man: No Way Home” would be even brighter.

However, don’t look at Spider-Man being unstoppable now. When he first made his debut, he had a very difficult time.

In the 1980s, as the paper comics had already sunk, American comic companies had a difficult time.

DC, which is the two giants of the US and Manwei, is the same as Marvel, but because DC found a gold master as early as 1969, it was acquired by the Hollywood giant Warner Bros., so DC is not too panic.

But Marvel was different. At that time, Marvel’s financial difficulties became more and more serious. In desperation, Marvel can only find companies willing to shoot their hero movies.

Which hero does it belong to? Of course it is the most popular Spider-Man.

Soon, Marvel found the Canon Group, and the two parties signed a treaty.

Canon paid $225,000 to Marvel to obtain the rights to Spider-Man’s film and television.

But they must release Spider-Man-related film and television works within 5 years, otherwise the copyright will automatically return to Marvel.

The dignified Marvel’s first superhero was worth more than 200,000 US dollars at the time. I have to say that it was really miserable.

But the so-called people have to bow their heads under the eaves, this is no way.

At first the Canon Group was very attentive to Spider-Man movies, but unfortunately they did not have experience in making superhero movies, and the director they hired did not even know Spider-Man at all.

They also take it for granted that since it is “Spiderman”, it should be a monster like a werewolf.

The director’s original idea was to set the protagonist Peter Parker to be exposed to radioactive bombing during scientific research, and then mutated into a hairy eight-armed monster.

Because this humanoid spider monster refused to join the scientists’ mutant project, it started a series of struggles with them in the underground laboratory.

I have to say that this idea is really bold, but the problem is that it has nothing to do with the hero of Spider-Man.

Stan Lee was terrified when he learned about the thoughts of the two directors. As the creator of Spider-Man, he didn’t want his own son to be on the street when he first appeared on the screen.

As a result, Stan Lee went to great lengths to integrate many Spider-Man related stories and turned them into scripts before sending them to the two directors.

The script after Stan Lee’s polish is obviously much more complete, and the Canon Group plans to invest a budget of US$15-20 million to shoot this movie.

Casting is also in full swing, and they plan to include actors such as Tom Cruise and Hepburn.

However, with the failure of Warner’s “Superman IV: The Quest for Peace”, Canon changed its mind.

Canon feels that investing so much money to make a superhero movie seems to be very risky and not so cost-effective.

As a result, Canon immediately cut its budget to less than 10 million. As a result, the director was very dissatisfied and left directly.

As a result, the Spider-Man movie was shelved. The Canon Group felt that if it invested more money, the gain would not be worth the loss, and it ended the project directly.

However, the Canon Group was later acquired because of bankruptcy, but Spider-Man found his Bole.

At that time, a high-level executive named Gao Lan left with the copyright of Spider-Man and went to a film industry named 21st Century. He was constantly looking for a director who was willing to take over for it. He even went and continued with Marvel. Two-year copyright term.

James Cameron was very interested in Spider-Man movies. He even wrote the script at the time, and he even persuaded a film company named Carlock to buy the project.

If there were no accidents, the first Spider-Man movie should have been Cameron’s work, but accidents happened.

Due to the poor financial status of the 21st Century company, its resource pool was quickly acquired by the Hollywood giant MGM at the time.

As a result, there is a big problem with Spider-Man’s film and television copyright.

Both the 21st Century Company and Carlock Pictures claim that they own the copyright to the “Spider-Man” movie and have been arguing about it.

Later, due to the long duration, Gao Lan was very dissatisfied with this, saying that the two film companies had been doing something wrong and hadn’t filmed for so long.

Of course, the worst is Marvel, who originally planned to let these film companies make movies so that they can get some share from it.

However, these film companies and producers have been dragging around, and they have not had a movie for almost 10 years.

In the end, there was no way. Marvel, which could not survive, declared bankruptcy. Carlock Pictures went bankrupt as well as the 21st Century business. Cameron didn’t want to go to this muddy water and exit.

After another two years, Marvel returned a wave of blood to himself through reorganization. At that time, it had been five years since the copyright of Spider-Man was sold, so it returned to Marvel.

Marvel, who took back the rights to his son, immediately looked for a new buyer for him, and then sold it to Sony Pictures for $7 million.

In desperation, Sony started negotiations with MGM, because Sony’s subsidiary Columbia Pictures had previously obtained some of the related copyrights of 007, and 007 is the most important film and television IP under MGM.

So Sony used this as a bargaining chip in exchange with MGM.

Sony will never give up movies related to 007, and will never shoot any film and television related to James Bond, but MGM must abandon “Spider-Man”. Spider-Man movies can only be developed exclusively by Sony, and Sony gave it back. MGM has many benefits.

In the end, MGM chose to make concessions, and the copyright dispute for “Spider-Man” is now considered to be over, and the filming of “Spider-Man” can finally officially begin shooting, which is the Toby Maguire version of the trilogy.

It can be said that it is really not easy for Spider-Man to come along, but the final ending is also good.

In addition, Sony now has the idea of ​​forming a “Spiderman universe”. If nothing else, Spiderman’s future road will only become more and more brilliant. 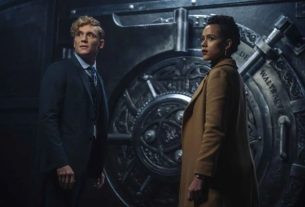 Can “Army of Thieves” become a prequel to “Suicide Squad”? Jared Leto and model Daria Korchina on vacation in Italy