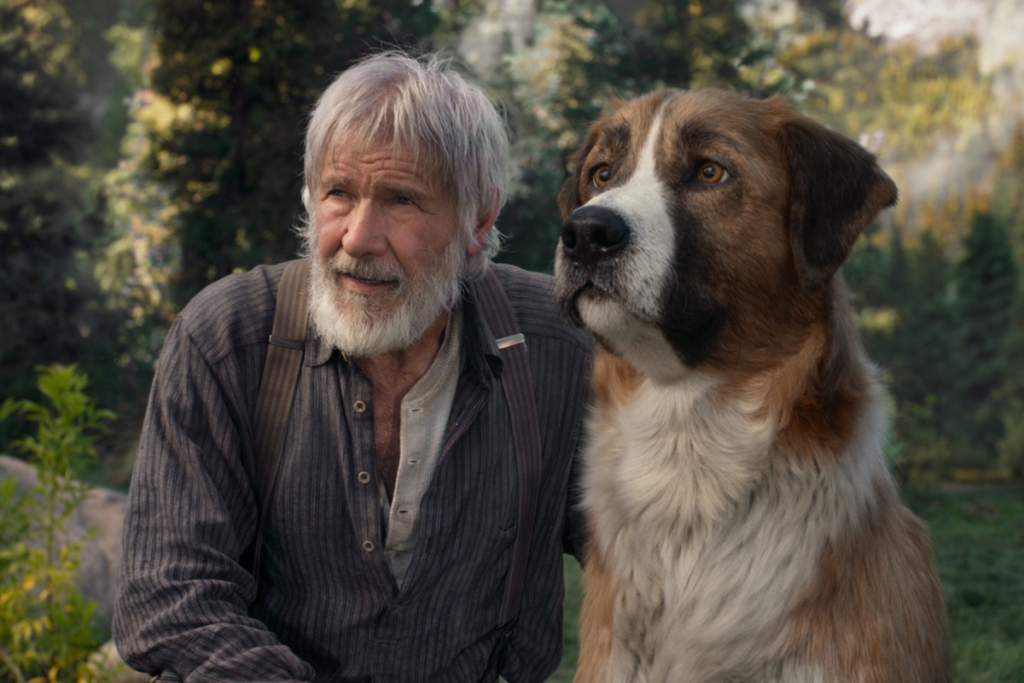 There have been movie adaptations of Jack London’s classic 1903 novel The Call of the Wild dating as far back as a silent 1923 version. Cinematic treatments continued in the 1930s with an adaptation starring Clark Gable and Loretta Young, and subsequent versions had lead actors that included Charlton Heston and Rutger Hauer. All of these films had at least one thing in common: They starred a real damn dog.

Such, unfortunately, is not the case with the latest version, starring Harrison Ford as the good-hearted prospector John Thornton, who forms a bond during the Yukon Gold Rush with a St. Bernard/Scotch Collie canine named Buck. In a blow to animal employment in the acting profession, Buck, who boasts the vast majority of the onscreen time, is played not by one or more actual dogs but rather Terry Notary, a very human former Cirque du Soleil performer who delivers a motion-capture performance. Such is also the case with the many other dogs and other animals shown, giving this Call of the Wild a similar feel to such recent Disney photorealistic animated films as The Jungle Book and The Lion King. It’s not surprising that the film marks the live-action debut of director Chris Sanders, whose previous credits include Lilo & Stitch, How to Train Your Dragon and The Croods.

The results are visually disorienting, to say the least. Although Notary and the special effects team do as good a job as technology allows, the expressive Buck never quite looks real. And you keep expecting him and the rest of the animals to burst into song.

On the other hand, it might have been a reasonable approach, since this version scripted by Michael Green takes considerable liberties with the source material and significantly ups the danger and spectacle. The Buck in this film isn’t just a fearless, stout-hearted dog; he also engages in a daring underwater rescue in a frozen river and even outruns an avalanche. Apparently, the creators felt that London’s tale wasn’t exciting enough, although it has been delighting readers for more than a century.

None of this may matter to the young audiences to whom the pic is obviously aimed. But more discerning viewers will wince at how everything has been exaggerated to comic proportions, both intentional and not. In the early scenes depicting Buck’s spoiled life in the household of a prosperous family headed by Judge Miller (Bradley Whitford, in little more than a cameo), he wreaks the sort of slapstick havoc that would have caused Beethoven to hang his head in shame.

A significant plot element involves Buck falling under the temporary ownership of the siblings Hal (Dan Stevens) and Mercedes (Karen Gillan), the former foolishly insisting that Buck lead a pack of dogs over a frozen river despite the fact that the ice is melting. In the original novel, they, along with Mercedes’ husband Charles (Colin Woodell), wind up drowning. Here, Hal is transformed into a snarling villain who bedevils Buck and Thornton to the very end, with the normally reliable Stevens encouraged to deliver the sort of moustache-twirling Snidely Whiplash turn that makes Hal seem like an animated character himself.

Fortunately, Ford, sporting a burly white beard, is on hand to lend some nuance to the proceedings. The veteran actor delivers a sensitive turn as the kindly Thornton, who still grieves the death of his son and subsequent split from his wife and nurses his sorrow with alcohol. (Unable to resist any anthropomorphism, the film has Buck repeatedly trying to take away Thornton’s booze, like a canine AA sponsor.) Seeming more invested onscreen than he’s been in a while, Ford infuses his typically understated performance with a moving emotional depth that’s the best thing in the film, although the fact that he narrates the story as well (from Buck’s perspective, no less) is more reflective of his star power than storytelling logic.

Running a mere 100 minutes, the film certainly moves briskly enough, and it looks terrific, thanks to the handsome cinematography by two-time Oscar-winner Janusz Kaminski. Particularly fun are the scenes in which Buck becomes part of a mail-delivering sled dog team led by a French-Canadian couple enjoyably played by Omar Sy and Cara Gee. And the final sequences, depicting Buck’s inevitably succumbing to the call of the wild and bonding with a pack of timber wolves, are moving, even if the animals are CGI-created.

Maybe it’s a sign of times that Harrison Ford is sharing a screen with a digital dog. Why use a real canine when a computer can make certain that a pixelated pup performs according to SAG rules and not his actual nature? You can hear the voices of future filmmakers, echoing throughout the Hollywood Hills: “Get more feeling into the mutt’s eyes.” “Make him run faster than a real dog can!” That’s the case in The Call of the Wild, the umpteenth screen version of Jack London’s classic 1903 adventure novel about a St. Bernard/Scotch Collie named Buck who finds his true heart in helping grizzled, hard-drinking prospector John Thornton (Ford) search for gold in the Yukon. Luckily, Ford is at his droll, grumpy-old-man best, so he can do his own acting without having his emotions computer generated. At least for now.

The Call of the Wild, rated a cozy PG, misses the edgy darkness of London’s tale and is too cute by half. But it fulfills its promise as harmless entertainment — The Call of the Mild is more apt title. From the comic early scenes, in which the untrained Buck runs amok at the plush California ranch owned by a sweetly patient Judge Miller (Bradley Whitford), the film proceeds to the only semi-scary dog-napping that lands Buck in Alaska as a sled dog who resists the whip of servitude. Obedience needs to be beaten into Buck (ouch!) until he learns the game from a kindly French-Canadian couple, played by Omar Sy and Cara Gee, who run a dog-driven, mail-delivery service. But the use of the telegraph soon makes sled-teams obsolete, putting Buck out of business until  he is sold to Mercedes (Karen Gillan) and her villainous brother Hal (Dan Stevens), a cruel idiot who tries to force Buck’s team to cross a frozen river that’s quickly melting.

You get the drill. Working from a merely serviceable script by Martin Green, animation director Chris Sanders makes his live-action debut in a film that too often feels like a cartoon in the manner of his previous films Lilo & Stitch, How to Train Your Dragon and The Croods. It’s understandable that you wouldn’t want to put an actual dog in scenes that require a dangerous underwater rescue and an escape from a life-crushing avalanche. But something is missing here. Lassie, Rin Tin-Tin and Beethoven would have all been pink-slipped if they tried to star in movies today. Imagine a digital French Mastiff slobbering all over Tom Hanks in Turner& Hooch. It just wouldn’t be the same.

And it isn’t. The great cinematographer Janusz Kaminski (Schindler’s List), shooting on sets in Los Angeles, works hard to give the film an epic, lost-in-the 1890’s Klondike scope. He succeeds more often than the computers do at bringing all the dogs to life, as well as a Timberland wolf who becomes Buck’s romantic interest. The illusion works best when it comes down to the interaction of one man and one dog. Ford’s natural warmth, humor and star charisma help audiences suspend disbelief, as does the talent of Terry Notary, the motion-capture artist and former Cirque du Soleil performer, who stood in for Buck on set. Notary was brilliant as the ape man who went batshit at a fancy museum party in Ruben Ostlund’s The Square in 2017. And he gives everything he’s got here as he and Ford interact as costars, wrestling, battling and bonding (Thornton even rubs Buck’s belly). It’s a neat party trick.

But the feeling persists that a real dog could have closed the emotional gap that technology puts between illusion and reality (last year’s photorealistic take on The Lion King had the same distancing problem). Digital slight-of-hand makes a poor substitute for all things bright and beautiful. Faking it is no answer to Jack London’s call of the wild — or an audience’s call for astonishment.