A few days ago, in an interview, screenwriter Christopher Miller said that “Spider-Man: Across The Spider-Verse (Part Two)” will be released earlier than expected and “should be released in 2023.”

Christopher Miller said: “Miles’ journey is an epic. In the process of writing, we found that it takes two movies to carry it. The second one should be released in 2023.”

“Spider-Man: Into the Spider-Verse” is a 2018 animation. The sequel will be released in 2022, with a four-year interval.

However, the upper and lower parts of “Spider-Man: Across The Spider-Verse” will be screened in an uninterrupted manner, which is really surprising.

Related Post: “Spider-Man: Across The Spider-Verse (Part One)” trailer interpretation, the gold medal behind the scenes team to create a new benchmark for animated films!

Prior to this, Christopher Miller also said: “Those new artistic methods that will be used in movies are dazzling. They have left me speechless. At the same time, it also makes the first movie look like It’s full of charm like an old antique.”

Obviously, “Spider-Man: Across The Spider-Verse” will have an outstanding visual effect.

In December 2018, there were reports that the film was likely to put the clues of the story on the emotional clues between Jessica and Gwen.

After all, this is a story line that is very worth developing.

Judging from all the signs, Sony still expects the film to make a difference during the awards season. 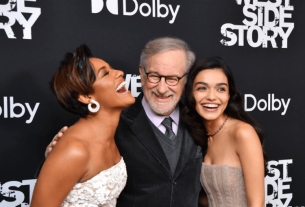 “West Side Story” premiered in New York, Spielberg returns with his new movie