‘Get Out’ ‘Us’ director Jordan Peele directed the supernatural horror film ‘Nope’ released a new trailer, will be released in Northern America on July 22.

The sky has a vision, airborne UFOs, a desolate town in California, a brother and sister want to shoot down to make money and become famous, only to find that a long period of attention to the sky brings danger.

Is it an alien visit to Earth, or is there another truth behind it, and what kind of social metaphor is implied this time?

The film stars Daniel Kaluuya (‘Get Out’), Keke Palmer (‘Hustlers’) and Steven Yeun (‘Burn’ ‘Minari’), with some scenes shot with IMAX cameras. 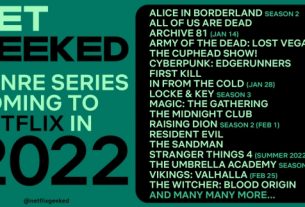 List of Netflix 2022 series: It contains TV series adapted from a large number of games such as “Cyberpunk: Edgerunners”