‘Fellow Travelers’, based on Thomas Mallon’s novel of the same name, is described as a political thriller & an ambitious love story about the intertwined lives of two very different men and the unstable love between them.

The story begins in Washington, D.C. in the 1950s, unveils in the era of McCarthyism, develops between the plague of purges, wars, and protests, and wraps up in the era of the AIDS crisis.

Bomer plays the charismatic political official Hawkins Fuller, who avoids getting emotionally involved with others until he meets a Fordham graduate, Tim Laughlin (Bailey), who is fervently sincere and full of idealism and religious conviction.

The two fell in love and walked hand in hand for 40 years, facing the world and all the obstacles between them.

Allison Williams plays Lucy Smith, the daughter of a senator who is a childhood friend of Hawkins.

Ron Nyswaner (‘Philadelphia’ ‘Soldier’s Girl’) is the operator, writer and also executive producer with Pomo and others, Daniel Minahan (‘Game of Thrones’ ‘Grey ‘s Anatomy’) directed the first two episodes, it will start filming in Toronto this month. 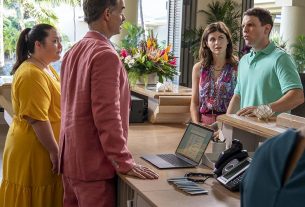 ‘The Batman’ exceeds $750 million at the global box office, and it will be streamed