The four creators of “Forrest Gump” reunite after 28 years: Tom Hanks and Robin Wright will star in the new film “Here”, directed by Robert Zemeckis and written with Eric Roth.

Sony has won the U.S. distribution rights for “Here,” which will begin filming in September, with plans to release it during next year’s awards season.

Based on the comic of the same name by Richard McGuire, “Here” is described as “a thrilling and revolutionary adventure through time and memory.

It revolves around a place in New England, from the wilderness to its later homeland – where love, loss, struggle, hope and legacy are passed down from generation to generation between couples and families. 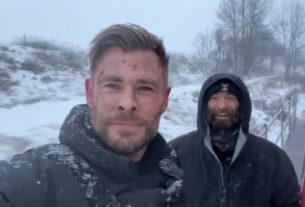 Chris Hemsworth shared the live video of the “Extraction 2” shooting: a train rushing in the wind and snow!