On August 27, a trailer for the episode of the same name adapted from the novel “The Lost Symbol” was released.

In the trailer of “The Lost Symbol”, a human hand that leads the story is completely restored.

In “The Da Vinci Code”, “Angels & Demons” and “Inferno”, Dan Brown unveiled to the public the heraldic and mysterious societies that have been circulating in Europe for hundreds of years.

Some deciphering links are mixed with a large amount of knowledge of art history and war history, which is eye-opening.

The series “The Lost Symbol” was written by Dan Brown.

In the trailer, a human hand that leads the story is completely restored, and the mysterious gestures and the engraved ring draw the semioticist Robert Langdon step by step into the center of the conspiracy.

It is reported that “The Lost Symbol” will be broadcast on September 16. 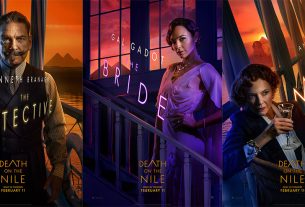 “Death on the Nile” released character posters, passengers prepare to board the ship