Camila Cabello appeared in the premiere of Cinderella, and her boyfriend Shawn Mendes wore a see-through top to help out.

On September 1, local time, in Miami, Florida, Shawn Mendes and Camila Cabello appeared at the Vizcaya Museum to participate in the premiere of the movie “Cinderella” in Miami.

The boyfriend Shawn Mendes next to Camila Cabello is wearing a black see-through shirt with a wide open mind and matching white trousers.

Related Post: Camila Cabello starring in “Cinderella” has a bad reputation, and the score is below the pass line.

The Sony version of “Cinderella” is Camila Cabello’s first work to hit the big screen.

“Cinderella” was filmed in the UK in February 2020, and Camila Cabello’s 23rd birthday was celebrated shortly after the filming started.

At that time, Shawn Mendes, who was far away in his hometown in Canada, flew 3,300 miles and headed to Blackpool Tower to celebrate the birthday of Cassie.

The crew also prepared a Cinderella-themed birthday party for Camila Cabello, which was very lively.

The new version of “Cinderella” is a modern new compilation of classic fairy tales, containing a lot of musical elements.

The story is an original idea, but there are still orphan girls and evil stepmothers in the story.

“Cinderella” will be launched on Amazon streaming on September 3. 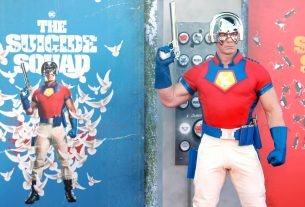 DC’s new superhero movie “Blue Beetle” is wrapped, and many creators have posted to celebrate