Darren Aronofsky’s ‘The Whale‎’ premiered at the Venice International Film Festival to much fanfare, with Brendan Fraser’s performance receiving much praise and Aronofsky’s direction being controversial. This attention continued into Toronto.

Since 2020, the epidemic and home isolation have been the inspiration for a number of new films, from Kenneth Branagh (‘Belfast’) to Sam Mendes, whose new film ‘Empire of Light’ just premiered at the Venice International Film Festival. Both openly stated that the forced isolation of their homes prompted them to reflect on their relationship with their families and thus conceive new scripts.

Darren Aronofsky’s new film ‘The Whale’ seems to follow the same route: the film is based on a stage play by Samuel D. Hunter set in his Idaho hometown, and the whole film is staged in a closed space.

Darren himself has not indicated whether the film’s inspiration is related to isolation, and the film does not specify the specific period in which the story takes place.

The film begins by introducing the audience to a familiar scene from the epidemic era: Charlie (Brendan Fraser), the hero, a college English teacher, is giving Internet classes to a group of bored students, but he never turns on the camera because he is extremely obese.

The special effects make-up and camera position will be like a walking monster, which is also the first layer of the title “The Whale” meaning.

As a result of his obesity, Charlie’s body organs have failed and his life is on its way out. The film gradually reveals to the audience the reasons why he destroys his body in the house where he lives, around his daily life.

The lead actor Brendan Fraser has received overwhelmingly positive reviews for his performance in this film.

In the film, Charlie is coming to the end of his life, but he can’t let go of a childish student assignment – a review of ‘The Whites’ (Moby Dick) paper; ‘The Whites’ has become the second layer of meaning of the film’s title.

Criticism of the film among the Toronto International Film Festival audience centered on its fully enclosed chamber drama format.

In the form of a stage adaptation, the camera movement is relatively limited, even though the film tries to enhance the cinematic feel through 4:3 framing.

The hero struggles with his sexuality and his estranged relationship with his rebellious daughter, and the overly melodramatic play has been described as “too melodramatic”.

These characteristics do not sound much like Darren, who is familiar with making literary films such as ‘Requiem for a Dream’, ‘The Wrestler’ and ‘Black Swan’.

In fact, ‘The Whale’, regardless of its strengths and weaknesses, is not out of the sequence of Darren’s work.

Several of Darren’s aforementioned critically acclaimed films also detail the protagonists’ failed struggles with their bodies, regardless of gender or profession.

In addition, there is a constant reference to the Bible in Darren’s work, which is also present in ‘The Whale’: the film depicts Thomas, a boy who goes door-to-door preaching, always trying to get Charlie at the end of his life to “get the will of God”; it is through his Through his relationship with Charlie, the audience learns what kind of trauma Charlie has suffered and why he let himself go.

As for melodrama, isn’t ‘The Wrestler’ a tear-jerker? As for the chamber drama format, Darren has already tried it once in his previous film ‘Mother!

In ‘Mother!’, the female protagonist played by Jennifer Lawrence could not get out of that room no matter what, and from this perspective, ‘The Whale’ is somehow the same as the previous film.

In fact, we might see the male protagonist of ‘The Whale’ as a symbol of contemporary America: terminally ill and too big to fail.

Looking at it this way, ‘The Whale’ is really just Darren’s basic operation.

‘The Whale’, the eighth feature film from American director Darren Aronofsky, is being distributed by A24 and will be released in the U.S. this December.

There is a direct portrayal of bulimia in this film that may cause discomfort to the audience. 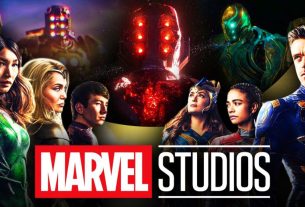 “Eternals” has polarized reviews, but I’m more concerned about the film’s connection to the Marvel Universe