Recently, the Marvel superhero series “The Avengers: The Kang Dynasty” and ‘Avengers: Secret Wars’ official announcement, respectively, will be released on May 2, 2025 and Northern America in November of the same year.

In an interview, Marvel President Kevin Feige explained why there was such a long gap between the two films and ‘Avengers: Endgame’: Because each new phase of the Marvel Cinematic Universe builds on the foundation of more series of films, ‘The Avengers ‘ is often the stage finale.

“The truth is, when we were doing phase one, phase two and phase three, there weren’t many projects, they were small projects and single character stories,” Kevin Feige told the press, “At that point in time, after doing a phase every two or three years, we did a ‘The Avengers’, and ‘The Avengers’ movie was the end of a saga.”

Before ‘The Avengers: The Kang Dynasty’, ‘She-Hulk’ and ‘Black Panther : Wakanda Forever’ will be the last two entries in the fourth phase of the Marvel Cinematic Universe, ‘Ant-Man and the Wasp: Quantumania’ to open the fifth stage, scheduled for July 2024 ‘Thunderbolts’ for the fifth stage of the final chapter.

Avengers: The Kang Dynasty’ will be directed by Destin Cretton, the choice of writers and the cast of characters has not yet been announced.

Among them, the villainous character “Kang the Conqueror” will continue to be played by Jonathan Majors, the character already appeared in the end of ‘Loki’ Season 1.

Before the release of ‘The Avengers: The Kang Dynasty’, Kang the Conqueror will also make another appearance in ‘Ant-Man and the Wasp: Quantumania’, which will be released in 2023. 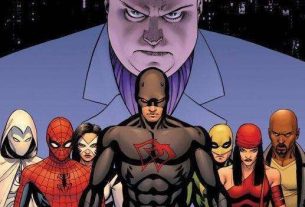 “Spider-Man: Into the Spider-Verse”: What capital does Kingpin have to defeat Peter Parker’s Spider-Man? Veteran actor James Caan dies at 82, ‘The Godfather’ cast misses him and ‘Sonny’