For today’s Marvel, because the setting of “three generations of Spider-Man in the same frame” is staged and the background frame of the Marvel multiverse is used, for the current Marvel universe, different universe versions of the same IP Each of the characters can be the beginning of a story.

This is not to mention the three generations of the same frame setting like Spider-Man.

For this reason, many Marvel fans may also be impulsive after watching “Spider-Man: No Way Home”.

For this reason, many fans at home and abroad also hope that Marvel can return some of the earlier versions of the characters, and even the characters in the previous Marvel spin-offs.

Fans who like the collection of different character versions of the multiverse, after finishing the addiction of Spider-Man, began to target the character “Hulk”.

After all, in the current Marvel character setting, the Hulk character is the only one that can be put together in 3 versions in addition to Spider-Man.

That is, the early version of”Hulk” directed by Ang Lee, later the version of “The Incredible Hulk” starring Edward Harrison Norton, which was co-operated by Marvel and Universal Pictures, and now the rejoined version of Hulk played by Mark Alan Ruffalo.

These three versions of Hulk actually have their own characteristics in their respective plots.

For example, the Hulk directed by Ang Lee, after the Hulk is transformed into a Hulk, the combat effectiveness of Hulk is more dazzling. Hulk bends the tank with bare hands, and bites the missiles are all classic pictures.

At the beginning, Edward Harrison Norton hoped that his Hulk could reach the height of Nolan’s “Batman: The Dark Knight”.

Of course, the Hulk of today’s version is more close to the people, characterized by highlighting the dominance of Banner~

Therefore, for these three editions of Hulk, many fans also hope that one day they will be able to see the third edition of Hulk in the same frame in the theater.

Many fans have even made posters of “Three Generations of Hulk in One Frame”!

In addition, there has been an increasing number of fans’ willingness to return to many of Marvel’s previous classic characters recently.

Many of the classic characters of the previous Marvel series, many fans still hope that Marvel can return them to the main universe.

Among them are: “Agents of S.H.I.E.L.D.” series of characters!

Many Marvel fans should know that although the “Agents of SHIELD” series that year was derived from the Marvel Cinematic Universe, it basically played it on its own, so that the series had the setting of the explosion of the earth. .

But the reason why it is so far apart from the Marvel Cinematic Universe is also because it was not Marvel Pictures, but Marvel Entertainment who was in charge of “Agents of S.H.I.E.L.D.” at that time.

The previous relationship between these two departments was also not very good. Therefore, this is why “S.H.I.E.L.D.” has no linkage in the Marvel Cinematic Universe.

And now Marvel Entertainment is also in charge of Marvel’s film department. Therefore, many fans also hope that Marvel Pictures can return the many characters of “S.H.I.E.L.D.”~

In response to this, Ming-Na Wen, the actor of Melinda May in the previous play, accepted the Deadline and said: “I like our small fan base is getting bigger and bigger, because I guess everyone starts to watch all the episodes again, and then realize What a great series this is. I really like the fans and their reactions. Who knows what will happen?”

Therefore, it is actually not impossible for the role of the previous “Agents of S.H.I.E.L.D.” series to return.

After all, compared to Warner in DC next door, Marvel still listens to the opinions of fans.

Today’s “three generations in the same frame” is actually influenced by the fan community to some extent.

In addition to “Agents of SHIELD”, among the many roles in the “X-Men” series earlier, “Storm” actor Halle Berry and “Iceman” actor Shawn Ashmore have expressed their willingness to join the Marvel Cinematic Universe. Thereby returning.

In this regard, the previous “Iceman” also said: “I don’t know, if it happens, will I play it again? One hundred percent, undoubtedly, I grew up playing that role, and I am a fan of comics. This is What I like, so I am willing to do it again immediately.”

Related Post: It’s finally here! After “Spider-Man: No Way Home”, the three generations of Hulk also have the same frame. 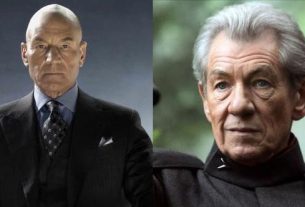 “Magneto” Ian McKellen shaved his head for the new drama, he teased Professor X: He understands the pain of baldness