“Aiyoku no wana”(愛欲の罠) was directed by Atsushi Yamatoya in 1973. It is a feature film starring Genjiro Arato and Moeko Ezawa.

For a killer, killing is just his job. After completing the job, he can get a bounty and live with his beloved lover, nothing more.

The killer is bold and skillful. He completed the task brilliantly. He passed the scene to check, but was discovered whereabouts.

In order to kill people, the organization sent a combination of doll killers to hunt down.

The doll killer consists of two small dolls and tall lanky robots. They are weird and cruel.

They used despicable means to torture and kill their lover, and the killer himself was also hunted down and seriously injured…

The killer lives in a hotel and is maintained by an old mother and her daughter who runs a skin business.

The killer hides here. He pays for fun, only to find that he is suffering from impotence.

The organization’s pursuit and killing did not stop, in addition to the pair of doll killers, they also sent another sharpshooter.

One day, the killer regained his sexual abilities, which made the woman in the hotel ecstatic.

The doll killer attacked again and raped and killed the woman with three indiscriminate methods.

The extremely angry assassin broke into the organization’s lair, vowing to give a tooth for a tooth…

At first glance, Moeko Ezawa is a pornographic film, but at a glance it is a revenge shootout full of cult style.

In “Koroshi no rakuin” directed by Seijun Suzuki, the killer loves to smell the scent of rice, while the killer in this film loves female sex.

He is in good condition, indicating that his career is successful, but when he is hunted down, he loses his sexual ability, finally his ability is restored, and his revenge is successful.

The doll killer setting in the film is full of cult flavor.

The short masked doll manipulates the tall robot, speaking like a ghost, and the modus operandi is generally to first sexually abuse and then kill in an indecent way.

What is very special is that the ending killer duel is held in an electronic playground, and the two killers shoot each other with air guns.

In the end, the killer killed the doll killer and the killer behind the scenes.

“Aiyoku no wana” is a refreshing alternative killer movie. 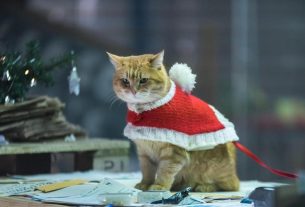 A Christmas gift from Bob: your cat is back! “Grindhouse‎” Review: A heavy-duty B-grade movie, the plot is unreasonable, but it is very enjoyable to watch!