As an important part of the DC universe, “The Flash” and “Batgirl” have always been key films.

A few days ago, some media revealed that two old actors will appear in these two films.

The first is that Michael Shannon will join “The Flash”. He once played the villain General Zod in “Man of Steel” in the DC Universe.

In addition, German actor Anjie Traou will also join the crew of “The Flash”.

However, it is still unknown whether Shannon will still play General Zod.

Film director Andrés Muschietti said that this film may surprise the audience.

In the film, the Flash uses his speed to open up the parallel universe. Therefore, many characters in DC comics, including Batman and others, will appear in the film.

The Flash is a key character in DC comics and one of the world-famous superheroes.

Currently, “The Flash” has been filmed and will be released in North America on November 4, 2022.

Another film that exposes new actors is “Batgirl,” and Michael Keaton joined the crew. Keaton once played Batman in the DC Universe.

However, whether he will continue to play the role of Batman in this film is inconclusive.

As for other actors, Leslie Grace, the heroine of “In the Heights”, starred as Barbara Gordon.

Leslie Grace is a Hispanic actor, which shows that the “Batman” universe will usher in racial diversity.

Barbara Gordon is the daughter of Gotham City Police Chief James Gordon. She has been jealous of crime since she was a child, and after a series of changes, she became a Batgirl.

Currently, “Batgirl” is being filmed in Scotland, and the release time has not yet been determined. Some media speculate that the film may be released at the end of 2022.

Related Post: Why did the two generations of Batman return to “The Flash”? Ezra Miller: We sent out the Bat Signal. 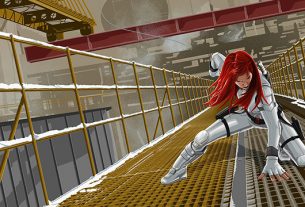