Zoe Saldana happened upon her latest project at a dinner with Reese Witherspoon.

“Well, Reese Witherspoon not necessarily landed on my lap, but kind of,” the actress, 44, tells of how she came to portraying Amahle “Amy” Wheeler in From Scratch, Netflix’s adaptation of Tembi Locke’s memoir From Scratch: A Memoir of Love, Sicily, and Finding Home.

“We were at dinner with our partners and some common friends,” recalls Saldana. “And I guess she saw the dynamic between my husband [Marco] and I, and then called me up the next day or a week later to tell me that her company, they had read this book, and it was going to be a part of their club.”

At the time, the New York Times best seller hadn’t been released yet, but Witherspoon, 46, strongly felt Saldana would have a real interest in it.

“I was a little nervous because you’re scared to open up your heart to something that you know has an eminent ending,” the actress admits, but she decided to take on the role anyway.

The story follows Saldana’s character, who is an an American student studying abroad in Italy. She ends up meeting a Sicilian chef named Lino who faces health struggles before their two families come together.

“When I read it, obviously we all know how Tembi Locke and Saro’s story ends,” Saldana says. “But their love, their friendship, their life, their journey, the story of their lives together, it’s timeless. And that was deeply moving to me.”

From Scratch also struck a personal cord for the Guardians of the Galaxy star, who married artist Marco Perego (now Saldana) in 2013.

“I would laugh out loud to all the things that she — as a woman that is not Italian, marrying a very Italian man — went through,” she says of reading the book. “It’s an ongoing thing for me. It’s a saga that never ends, that I love. I’ve learned to embrace a lot of it.”

Saldana, who pulled double duty as an executive producer alongside Witherspoon, describes it as “perfect and beautiful and blissful and exactly what I wanted.”

She does note, though, “It’s not for the faint of heart when you marry somebody who comes with a big baggage of 4,000 years of history and art and philosophy.”

“And great cuisine,” she adds. “It’s a lot to handle in just one simple day.” 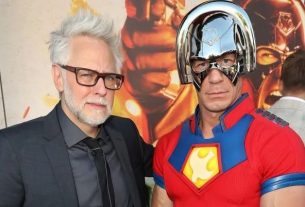