Brie Larson starring in the new series ‘Lessons in Chemistry’ first revealed stills, it will be online next year Apple TV +.

‘Lessons in Chemistry’ is adapted from a novel by writer, science editor and advertising contributor Bonnie Garmus, about a heroine, Elizabeth Zott (Larson), who aspires to be a scientist in a male-dominated world in the early 1960s, working in a laboratory She works as an assistant to Calvin (Pullman), a well-known scientist, and sparks fly between the two in chemistry.

But at the time, society generally believed that women belonged only in the home and not in the professional world, and her dreams were put on hold.

Then Elizabeth, finding herself pregnant, alone and fired from the lab, was sparked with the brilliance that only a single mother can have. She accepted a job as a host on a TV cooking show and began teaching a nation of neglected housewives and some men who suddenly began to listen with their hearts a lot more than recipes, and always longed to return to the field she truly loved: Science. 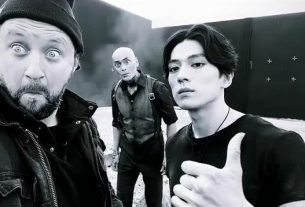