The unknown truth in Hollywood movies is known to the director, but the audience will never know.

The directors got into trouble while making another movie. But like other professions, they often face industry costs.

In order to make a new movie, they not only have to experience wind and rain, but also adapt to the ever-changing industry environment.

We want to share with you 12 unexpected facts from the movie world, these facts may surprise sophisticated audiences.

Since 2012, the company has been asking film studios to display iPhone and other products in a positive manner.

This is because our brain cannot understand that the stereoscopic image it sees is just an illusion of the depth of space.

He tried to act as if it was a real physical object in front of him, and tried to focus on that object.

But in this case, the brain will only increase the tension of the eye muscles and cannot succeed.

The result is dizziness, headache and nausea.

Either use only small particles (dust, ashes, snow), and the brain thinks these particles are noise instead of trying to concentrate.

3.In the intimate scenes, the actors wear special body underwear.

There were also artificial breasts and buttocks, which were later processed by computers.

By the way, when we see an actress naked, she is not naked.

The front of her chest is covered with special padding.

4.The kids in the horror movie don’t know what the movie is about

Most of the time, children do not know that they are making horror movies.

Shooting is rarely done in chronological order, and it is difficult for a child to combine scenes into one picture.

There is nothing scary about the scene: music and sound have been added to post-production, and costumes, masks, dolls and dolls look more interesting in real life than scary.

When it comes to scenes where a child comes into contact with blood or something really scary, it’s like a game.

Danny Lloyd played a boy in the famous “The Shining”, he didn’t even know what role he played in a horror movie.

Director Stanley Kubrick decided not to tell him this story.

Danny Lloyd always thought this was a drama about a family living in a hotel.

5.The trailer of the movie is not produced by the film company, but by the advertising company

It seems easier and cheaper for the filmmaker to make a 2-minute video. But this is not the case.

Usually, directors know that they are not good at marketing and do not know how to package a movie for a specific target audience.

So they usually do not take risks, but go to professionals.

6.The sound of broken bones in the thriller is the crunch of carrots and celery

When sound editors need to get as close as possible to the sound of broken bones, they break carrots and celery.

So next time you watch a violent and bloody movie, think about those poor vegetables.

7.The scene of using the mirror is one of the most difficult scenes

In the mirror scene, you should shoot at a certain angle to capture people and their reflections, but at the same time hide the camera and light.

For example, in the second best film about Terminator, they decided to use a study room and dolls.

In the scene where the character played by Linda Hamilton takes out the microchip from Arnold Schwarzenegger’s head.

No mirror: Schwarzenegger is sitting in front of the camera, and Linda’s stand-in casts magic on his head.

At this moment, the actress was standing in the front row, facing the doll’s head.

This is a trick, not a scam.

Some of them seem very obvious.

For example, in a stock trading scene in the movie “The Dark Knight Rises,” Batman enters a tunnel in broad daylight, and then exits from the other side in total darkness.

The problem is that the director often knows the plot loopholes and does so deliberately.

In the dark light, Batman looks more epic and more spectacular than during the day. For Christopher Nolan, making mistakes is enough.

In addition, the people who made this movie knew that most viewers would be too addicted to the plot and would not notice these details.

9.There is a company that specializes in providing snow for Hollywood movies

The snow used in Hollywood movies is artificial. In almost all cases, it is provided by Snow Commercial Company.

The company was founded in 1983 and has approximately 200 different types of snow in its “portfolio.”

Real precipitation is very uncomfortable during shooting because they have a tendency to melt under the camera.

However, in some movies, it does happen in snow-covered areas. For example, “The Revenant” filmed in a ski resort in Canada.

10.If extras look at the camera, they may be fired

Extras cannot look directly into the camera, and they may even be fired.

In addition, those extras who are far from the protagonist will not spend too long on the screen.

They should not wear white clothes or clothes with bright words, so as not to exceed their main role.

11.There is very little real food in movies

Normally, the food that appears in the movie is actually made of inedible materials.

Do you remember the food you saw in the hall in the Harry Potter movie?

The food in the first movie is real. Then it kept getting bad, so it had to be replaced over and over again.

Therefore, in the following legend, most of the food that can be seen in the Hogwarts Hall is made of resin and foam.

12.It is not accidental that the green background is used in movies with special

Because in the spectrum, it is the farthest away from the palette of red, orange, and yellow, which is the basic color of the human body.

He will always be distinct from anything (actor’s clothes, eyes, hair, accessories).

Have you seen anything in the movie that is unbelievable, but you don’t know how it was shot at all? 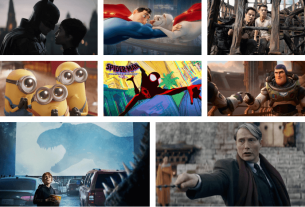