The troubles of a series of movies and TV dramas with children as the protagonists: As children grow up, the connection between scenes is prone to problems.

‘Stranger Things’ Will actor Noah Schnapp recently told Flaunt magazine that he was asked by producers to restore a bit of the child’s voice while filming season four (which would have been delayed by the epidemic).

He said, “That was the peak of growing up and changing, we go through puberty, growing up, everything is changing …… directors don’t like that. I remember one of the producers came up to me and said, ‘O Noah, is there any way you can speak a little higher in pitch and be a little more insipid? We need you to retain the naivety you had in Season 1.’ I replied: ‘I don’t know how I can answer you, my voice is getting lower, my voice is not young anymore.'”

Noah Schnapp’s vocal qualities are lower than the other young leads, but he’s actually the youngest of several teen leads.

Fortunately, the show no longer has this trouble in the fifth season, the new season will have a time jump, do not have to come very continuously. 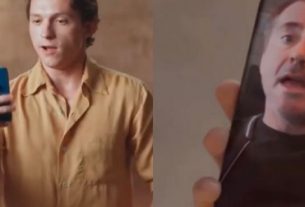 “Spider-Man: No Way Home” is about to be released, the “dream linkage” between Spider-Man and Iron Man has sparked heated discussion