Before talking about “Doctor Strange in the Multiverse of Madness”, I want to talk about director Sam Raimi.

Generally speaking, in order to meet the needs of most audiences, popcorn popular movies will be designed in a more moderate style, and the stories will be written in a simple and easy-to-understand manner to avoid difficulties for the audience to understand.

But this will also make the film lose the author’s style, and there are very few author-oriented directors who can direct high-budget special effects movies in a personal style, but can make a profit, and Sam Raimi used to be such a director.

Of course, the audience’s tastes change every year, and the director’s personal style is often seen as tired by the audience.

It was M. Night Shyamalan who caused the topic with “The Sixth Sense‎” and then continued to make several similar big productions, but the profits were getting lower and lower, and finally became a box office poison.

Michael Bay has been popular for more than ten years with his blasting aesthetics from “The Rock” to “Transformers”, but after “Transformers: The Last Knight”, it gradually ceased to be the mainstream of the market.

Of course, we can also mention Christopher Nolan, the most incredible director of recent years. His directing style is actually quite difficult to understand, but he has continued to win the favor of audiences for nearly two decades.

And Sam Raimi, the director who made his name in the B-level movies “Evil Dead II” and “The Evil Dead”, is best known for his 2002 “Spider-Man” trilogy.

It can be said that in the early 21st century, the synonym of superhero movies was opened by “Spider-Man”.

And after he became the leader of mass commercial film directors in one fell swoop, he began to enter into a cycle of consuming himself. Although “Spider-Man 3” still had a high box office, the film critics at that time generally had a bad attitude towards the movie’s perception.

In this way, Sam Raimi has slowly withdrawn from the field of first-line commercial directors, and will no longer direct superhero movies until this “Doctor Strange in the Multiverse of Madness‎” in 2022.

Apparently executive producer Kevin Feige didn’t intervene as strongly as he used to in Phase 1 of the Marvel Cinematic Universe, almost imbuing the film with Sam Raimi’s personal imprint.

So Sam Raimi played more aggressively in this movie, remember those montages in “Spider-Man” where multiple frames overlapped?

This montage is back in “Doctor Strange in the Multiverse of Madness”, and it’s used when casting spells.

This gives “Doctor Strange in the Multiverse of Madness” a lot of the experimental flavor of the movie, which makes the movie weird.

In fact, Sam Raimi’s directing style is quite wicked, and his films often appear in various B-movie-flavored visual language, which brings visual tension to the film.

Sometimes it’s so aggressive that it even looks like it’s a complete prank.

In the film, it can be seen that he has a great obsession with attracting eyeballs. Not only did he make a big-eyed monster make trouble in New York at the beginning, but it ended with piercing the eyeballs. After that, he repeatedly used various mirror movements to let the audience go directly to the role. In the pupil of the character, and then use various collage pictures to show the character’s spiritual world.

These retro visual processing at first glance gives the film a gloomy and dark atmosphere. Scarlet Witch is not a good kind in the film, but Doctor Strange is not a bright white-robed mage like Gandalf.

The moves and tactics he uses are often counterintuitive and even a little scary, so there are various creative fantasy battles in the movie, such as the war of notes that combines music and vision, and the battle between necromancers and witchcraft at the end of the film Both are.

But then again, not so many viewers are familiar with Sam Raimi’s way of playing, so the movie becomes very radio-eating.

If you are a viewer who doesn’t hate all kinds of wonderful visual languages, and you usually enjoy all kinds of thrillers and horror movies, you won’t have much problem watching this movie, and you may even enjoy it.

But if you’re the kind of viewer who only sees one movie a year, “Doctor Strange in the Multiverse of Madness” is a little more difficult.

Related Post: “Doctor Strange in the Multiverse of Madness” Review: Echoing other Marvel heroes, there’s everything in a dream. 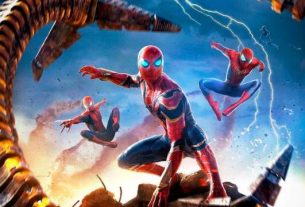 Tom Holland: Believe me, there really are no three generations of Spider-Man in the same shot