The much-anticipated “Love, Death & Robots Season 3” went online last weekend. Despite the decline in word-of-mouth for Season 2, the third season of this adult-oriented animated short collection, which was a hit when it came out, is still getting a lot of attention.

Season 118 episodes, Season 28 episodes, this season a total of 9 episodes. 9 stories, the subject matter still contains elements of fantasy, horror and science fiction, of course, there is no shortage of humor and visual innovation.

It was revealed that the episodes of the third season originally belonged to the second half of Season 2, and had to be split into two separate halves for release because of production time constraints.

This season, Tim Miller and David Fincher still co-executive producer, much attention is paid to David Fincher in this season contributed to his animation directorial debut.

In addition, the first two seasons of the director Tim Miller, Jennifer Yuh, as well as writers John Scalzi, Philip Gelatt and other old team members are also returning.

Behind-the-scenes production companies and the first two seasons also overlap, such as Blur Studio, Blow Studio, Axis Studios and other well-known animation studios in the industry, this season again “handle”.

It is worth mentioning that the main force of the Chinese concept art team ‘Tacit Sign Studio’ also participated in the production of the two short films this time.

Instead of talking about the content today, today we look at the behind-the-scenes lineup that is escorting the season and see what industry greats and top production teams are involved in the creation.

Running Time: 11 minutes Synopsis: Three robots travel to a post-apocalyptic era and learn about mankind’s last-ditch effort to save itself on a Cyclone-like journey.

Behind the Scenes: In Season 1, Victor Maldonado & Alfredo Torres co-wrote ‘Three Robots’, one of the funniest shorts in ‘Love, Death & Robots’.

This episode is a sequel to the ‘Three Robots’ story, in which the trio of machines continue their journey, researching strategies for human survival after the end of the world.

The film is directed by renowned American animator and screenwriter Patrick Osborne, who won the Academy Award for Best Animated Short Film for his 2014 animated short film ‘Feast’.

The story of ‘Three Robots: Exit Strategies’, like its predecessor, is derived from the short story of the same name by American science fiction writer John Scalzi (John Scalzi), who wrote the screenplay and whose masterpieces include ‘Old Man’s War’.

Length: 21 minutes Synopsis: Unleash the Thanapod! The crew of an alien ocean makes a deal with a ravenous deep-sea monster.

Behind the scenes: David Fincher’s animated directorial debut is the most talked about work of the season. 21 minutes in length, the longest of the nine shorts.

In fact, in addition to the fans know the director, screenwriter identity, David Fincher is also a “visual effects artist, a veritable cg maniac.

Back in the 1980s while working at Industrial Light & Magic, David Fincher worked on the visual effects for the action-packed sci-fi film ‘Star Wars: Episode VI – Return of the Jedi’.

‘Se7en’ screenwriter Andrew Kevin Walker wrote the script and reunited with Fincher for a story based on a short story by renowned British science fiction writer Neal Asher (Neal Asher).

Neal Asher is also the original writer of ‘Snow in the Desert’, episode 4 of ‘Love, Death & Robots Season 2’.

In addition, the Chinese concept art team ‘Tacit Sign Studio’ also participated in the production of this film and episode 6 ‘Swarm’, with more than a dozen designers involved, serving as the overall visual design of the two works.

This is also the conceptual design debut of the Chinese pre-creation team in a world-class project.

Production company: Blur Studio, one of the industry’s most well-known CG animation company. The game ‘Warcraft’ ‘Tomb Raider’ animation, their family did; the film ‘The Day After Tomorrow’ ‘X-Men’ ‘Transformers’ ‘Avatar’ post, is also their family did.

This state-of-the-art special effects animation studio, founded in 1995, is located in California, USA. Love, Death & Robots’ Season 1 ‘Sonnie’s Edge’ ‘Ice Age’ and other works, all from the hands of this studio.

This season they are responsible for the production of two parts: this episode and episode 6 ‘Swarm’.

03. “The Very Pulse Of The Machine

Length: 17 minutes Synopsis: The mission to explore Jupiter ends in disaster and the only survivor has to embark on a dangerous and unbelievable journey.

Behind the scenes: Asian-Australian director Emily Dean directs from a screenplay by Philip Gelatt, a familiar face from ‘Love, Death & Robots’ – the writer of Season 1’s ‘Ice Age’.

The story is based on a short story by the famous American science fiction writer Michael Swanwick (who won the Hugo Award for Best Short Story in 1999), who is also the original author of Season 1 ‘Ice Age’.

Production company: Polygon Pictures, Japan’s leading animation company, known for its 3D technology, representative works such as ‘Knights of Sidonia’ and ‘Demi-Human’, was responsible for the 3DCG part of ‘Ghost in the Shell 2: Innocence’ directed by Mamoru Oshii.

Behind the scenes: This is a satirical zombie film, Robert Bisi, Andy Lyon, co-directed and written by the duo, the story is based on a short story by Jeff Fowler, and Tim Miller.

Running Time: 13 minutes Synopsis: Trained U.S. Special Forces can eliminate any threat – even the cybernetic killing machines created by the CIA. And their secret weapon is a sense of humor.

Behind the Scenes: U.S. Army Squad vs. Mutant Bear Monsters! The film by “Kung Fu Panda 2

In addition to the ‘Kung Fu Panda’ series, Jennifer Yuh has also worked on DreamWorks Pictures animated films such as ‘Madagascar’ and directed the HBO self-produced animated series ‘Spawn’.

Philip Gelatt penned the script, which is based on a short story by Justin Coates, an American writer known for his work in the horror genre.

Behind the scenes: The film was directed and written by Tim Miller. Tim Miller, executive producer of the ‘Love, Death & Robots’ series and co-founder of the acclaimed Blur Studio, was nominated for an Academy Award for Best Animated Short Film for his 2004 animated short film ‘Gopher Broke’, co-produced with his partner Jeff Fowler. .

In 2016, Tim Miller had directed the movie ‘Deadpool’.

The film’s story is based on a short story by well-known American science fiction writer Bruce Sterling, which was nominated for the 1983 Hugo Award and the Nebula Award for best short and medium story.

In the science fiction world, Bruce Sterling defined the ‘Cyberpunk’ science fiction genre, the film is also the first film and television presentation of his work of fiction, Tim Miller personally on the scene, enough to show sincerity.

Production company: Blur Studio, and the second episode of ‘Bad Travelling’ from the same studio.

Running Time: 10 minutes Synopsis: Welcome to the rat apocalypse! When the mice start fighting back, farmer Mason learns he has a real pest problem. It’s a real killer!

Behind the scenes: This short film, known as the “dark humor version of ‘Animal Farm'”, is a battle of wits between man and mouse.

The film was directed by Carlos Stevens and written by Joe Abercrombie, based on a short story by British science fiction writer Neal Asher.

This season, Philip Gelatt is also the writer of three short films, in addition to this film, ‘The Very Pulse Of The Machine’ ‘Kill Team Kill’.

The story is adapted from the short stories of well-known Australian writer Alan Mah Baxter, whose novels are mostly based on horror and supernatural thrillers.

Behind the scenes: new and fresh painting style, original story plus beyond the imagination of the CG technical effects, fans call for the highest ‘Jibaro’ deserved to become the season’s finale.

Alberto Mielgo, the director of Season 1’s highly rated single episode ‘The Witness’, returns to direct and write the show.

The Spanish master animator and former art director of the animated film ‘Spider-Man: Into the Spider-Verse’ is known as the man with the “ceiling of animation” for his high recognition in the field of animation. 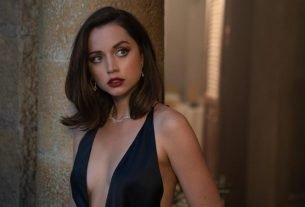 “Spider-Man: No Way Home” Releases “Three Spider-Man in the Same Frame” and Original Concept Art of the Villain