Winston Duke has joined the cast of Ryan Gosling’s upcoming The Fall Guy, THR reports, adding yet another big name to the list of folks signing on for Gosling’s stuntman-focused action-adventure.

Duke—who’ll be showing up on screen soon in Black Panther: Wakanda Forever, and who showed off his more comedic side a few years back in Jordan Peele’s Us—has joined David Leitcth’s adaptation of the ’80s Lee Majors TV series.

And while The Fall Guy hasn’t quite hit what we think of as the “Glass Onion inflection point”—i.e., that point where you notice the list of names attached to a project flipping over from “Hey, nice” to “Woah, good fucking cast!”—it’s definitely getting there.

In addition to Gosling and Duke, the film will also co-star Emily Blunt and Stephanie Hsu, plus Aaron Taylor-Johnson.

Rather than directly adapt the slightly dated (if also fairly badass) premise of the show—stuntman moonlights as a bounty hunter, does many stunts along the way—the film version sounds a little more staid, with Gosling playing an aging stunt guy who discovers that the guy he used to double for has gone missing. Mysteries—and, god willing, stunts—ensue.

No word yet on who Duke will be playing, but we’d be lying if we didn’t clock that his attachment is building our excitement for the project, which went into development back in 2020.

Duke’s last film role (before Wakanda Forever hits theaters on November 11) was also, as it happens, in a revival of a classic ’80s pulp show; he played Hawk, opposite Mark Wahlberg, in Peter Berg’s 2020 Spenser Confidential. 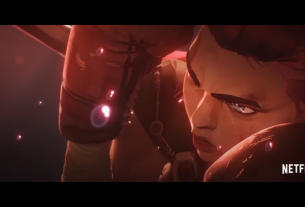