‘Warcraft‎’ actor Travis Fimmel joins HBO’s ‘Dune’ spin-off ‘Dune: The Sisterhood‎’. Growing up on a poor planet, Fimmel’s character escapes suffering and trauma by joining the military, according to people familiar with the matter, a “charismatic soldier with an enigmatic past, who seeks to gain the Emperor’s trust at the expense of the Sisterhood.”

That little bio requires some explaining for anyone who isn’t up-to-date on basic Dune mythology, but the short version is that it sounds like he’s a bad guy.

The eponymous Sisterhood will be an early version of the mystical Bene Gesserit sect, who use their magical abilities to shape the future of the Dune universe in the main canon, with this series telling the story of the group’s creation.

It stars Emily Watson as Valya Harkonnen and Shirley Henderson as Tula Harkonnen, distant ancestors of Baron Vladimir Harkonnen from the time of Dune (The Sisterhood takes place 10,000 years before Timothée Chalamet shows up and starts doing messiah stuff) as they “combat forces that threaten the future of mankind.”

So if Fimmel’s Desmond Hart is trying to undermine the Sisterhood, that’s bad, at least if you operate under the assumption that the main characters in the show are the ones are you’re supposed to root for.

Diane Ademu-John is the creator of the show and shares showrunning duties with Alison Schapker. Johan Renck is directing the premiere, and Denis Villeneuve is onboard as an executive producer.

The next Dune movie is set to open in theaters in November of 2023. 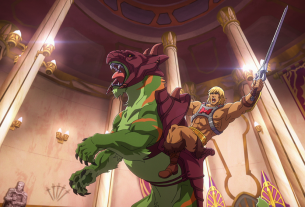 The official trailer for “Masters of the Universe: Revelation” series has been expose