Stephanie Hsu is everywhere all at once, and now the Everything Everywhere All at Once star is joining Ryan Gosling in ‘The Fall Guy’.

After portraying Joy Wang, daughter of Michelle Yeoh’s character in the acclaimed Everything Everywhere, Hsu will play the assistant of a gone-missing movie star, according to The Hollywood Reporter.

Hsu’s casting comes after Leitch’s Bullet Train star Aaron Taylor-Johnson (Marvel’s Avengers: Age of Ultron, the upcoming Kraven the Hunter) joined the cast as the movie star at the center of the mystery.

Emily Blunt (A Quiet Place, Jungle Cruise) is playing a prosthetic makeup artist who has a romantic history with Gosling’s character, described as “a battered and past-his-prime stuntman … who finds himself back on a movie with the star for whom he doubled long ago and who replaced him.”

Leitch and his Bullet Train producer Kelly McCormick (Atomic Blonde, Nobody) are producing under their 87North banner, along with Gosling and Guymon Casady (Game of Thrones) for Entertainment 360. Executive producers are Pearce and Geoff Shaevitz (John Wick).

Hsu’s credits include her recurring role as Mei Lin in Amazon’s The Marvelous Mrs. Maisel and Shu Shu in Awkwafina Is Nora from Queens.

She recently received a Saturn Award nomination for Best Supporting Actress for her role in the acclaimed Everything Everywhere All at Once and next appears in American Born Chinese, an upcoming action-comedy series from Marvel’s Shang-Chi director Destin Daniel Cretton for Disney+. 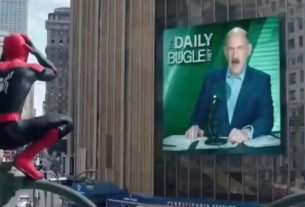 “Spider-Man: No Way Home” opening scene is exposed for the first time, and the identity of Spider-Man is exposed