The romantic comedy ‘Love Again’ starring Sam Heughan and Céline Dion has been postponed from February 10 next year to May 12 in Northern America.It was formerly known as ‘It’s All Coming Back to Me’.

Along with the announcement of the release date change, a new image from the film was also released. The film’s release was moved from February 10, 2023 to May 12, 2023.

Love Again is a film that poses the question of fate. What if a random text message led you to the love of your life?

The film will follow Mira Ray, played by Priyanka Chopra Jonas, who is struggling with the loss of her fiancé. To cope with her loss, Mira sends a series of romantic texts to his old cell phone number.

However, what Mira doesn’t know is that his number has been reassigned to a man named Rob Burns, played by Sam Heughan. Rob, a journalist, becomes entranced by Mira’s beautiful and confessional text messages.

And when Rob is assigned to write a profile the legendary Celine Dion, who is playing herself, he will enlist the megastar’s help to figure out how to meet Mira, and how to win her heart.

The new image, released today, shows Mira and Rob sitting across from each other in a restaurant, giving a pretty adorable toast by bumping together two cheeseburgers.

The scene is warm, romantic, and lowkey, with the pair looking straight into each other’s eyes, ready to fall in love.

The role is new ground for Heughan, who is perhaps best known for his role as Jamie Fraser in the period drama Outlander.

Chopra Jonas is perhaps best known in America for her work on the series Quantico.

The film will be Dion’s first film role, in which she will play herself, and will feature an original song sharing the film’s title. Love Again was written for the screen and directed by Jim Strouse.

The film is being produced by Basil Iwanyk, Erica Lee, and Esther Hornstein. The executive producers for the film are Doug Belgrad, Sophie Cassidy, Louise Killin, Jonathan Fuhrman, and Celine Dion. 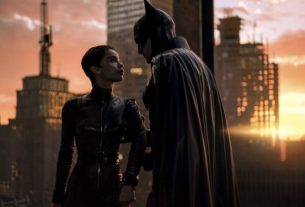 New stills of “The Batman”: Batman and Catwoman look at each other affectionately!