Johnson just made his long-awaited debut in the DCU in the smash hit Black Adam movie. And Evans is strongly associated with the MCU thanks to his portrayal of Steve Rogers aka Captain America.

But these two superstars’ associations with rival cinematic universes are about to be put aside at least temporarily, as Johnson and Evans are set to team up in Red One from Prime Video.

Johnson of course is familiar with putting in work for the major streaming services, having starred in the Netflix spy thriller Red Notice (which bears no relationship to Red One) alongside fellow superstars Ryan Reynolds and Gal Gadot.

And Evans has previously jumped on the Netflix bandwagon too, starring in 2022’s Russo Brothers action film The Gray Man.

But Johnson and Evans are clearly not exclusive to Netflix, as they’re both hopping over to Prime Video for their big team-up movie Red One.

Details on the film are being kept under wraps, but thanks to The Daily Mail, there are some leaked set photos for fans to check out, featuring clean-shaven Johnson and scruffy-bearded Evans in costume.

Though plot details on Red One are a secret as of now, the movie’s tone has been teased by producer Hiram Garcia, who compared it to Johnson’s Hobbs & Shaw as well as Guardians of the Galaxy.

Garcia also teased the movie’s “crazy mythological elements” and “globe-trotting,” while promising the film will play around with holiday movie tropes.

Another thing Red One has going for it is a strong cast, which besides Johnson and Evans includes Lucy Liu, Kiernan Shipka, Mary Elizabeth Ellis, J.K. Simmons and Nick Kroll.

Given that Johnson was reportedly paid $50 million for his involvement in Red One, it’s a fair bet that Prime Video will go all out in making the movie a big-time holiday event.

The presence of Evans of course is a wild-card, as the actor has endeavored to break away from his straight-laced Captain America image by playing some less-likable characters, and may seek to do so again in Red One.

It will indeed be fascinating to see the dynamic between Evans and Johnson as they team up in what figures to be an action-packed movie with a humorous tone.

Red One is currently set for a 2023 holiday season release via Prime Video. 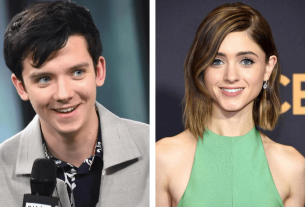 “All Fun and Games”: Asa Butterfield and Natalia Dyer to co-star in horror/thriller film