Marvel spotlights Bassett’s Queen Ramonda in their Oscars campaign kick-off for Black Panther: Wakanda Forever. Seated front and center, the campaign features Variety’s take on the actor’s “mesmerizing” performance. The emotional weight, “profound” themes, and cultural impact are also listed as reasons for how the movie has distinguished itself this awards season. The poster makes it clear that Marvel intends to submit the film for Oscar nominations in “all categories.”

In 2019, the original Black Panther was nominated for 7 Academy Awards, making history as the first ever film in the superhero genre to receive a nod for Best Picture. The film earned three wins: Best Costume Design, Best Original Score, and Best Production Design. Seeing as Black Panther was considered a mainstream-appeal blockbuster, the wins and nominations were unprecedented and further reinforced the film’s phenomenon status, accompanied by its breaking of box office records with its $1.3 billion revenue.

A similar campaign is anticipated for the 2023 Oscar season. Marvel will most certainly be campaigning for Bassett’s place in the Best Supporting Actress category, and rightfully so. Bassett’s portrayal of Ramonda, the Sovereign Queen Mother of Wakanda, is one of Black Panther: Wakanda Forever’s standouts. Simultaneously mourning the death of T’Challa (Chadwick Boseman), supporting a similarly grieving Shuri (Letitia Wright), and leading her country, Bassett perfectly depicts Ramonda in the heaviness of her responsibilities. There is a quiet grace and powerfully heartbreaking quality in her performance that left many wondering how Bassett hasn’t already gotten an Oscar throughout her substantial career (which consists of a spot-on portrayal of Tina Turner in What’s Love Got to Do with It?).

Bassett is surrounded by plenty of other strong performances, the notable ones including those of Wright, Danai Gurira, and Tenoch Huerta Mejía. They are all fair game for this awards season, though Bassett currently stands the strongest chance of being honored. As Marvel suggests, Black Panther: Wakanda Forever is a richly told story about loss, healing, and legacy. It’s also an allegory about power, colonization, and gray areas. Along with the dazzling visual effects and stellar production quality, Black Panther: Wakanda Forever makes a great case for itself, efforts which viewers are hopeful will not be in vain. 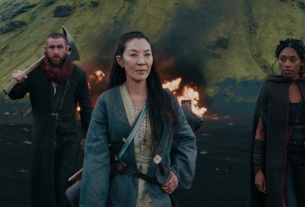 Model Helena Gatsby at the premiere of Crimes of the Future ‘Next Goal Wins‎’ released a still, the coach is drinking coffee with a cup