Lucy, the 2014 sci-fi film starring Scarlett Johansson is getting a new TV series spinoff, one that will see Oscar-winning actor Morgan Freeman reprise his role from the original film.

EuropaCorp and Village Roadshow (both owned by Vine Alternative Investments) have partnered for the Lucy TV series; EuropaCorp partnered with Universal Pictures on the original film.

While Lucy writer/director Luc Besson isn’t directly mentioned as being involved, EuropaCorp is his production venture so it’s reasonable to expect he will be involved in some capacity.

If you haven’t seen the film, here’s a detailed synopsis for Lucy (2014), which kind of shapes any breakdown of a TV series’ potential:

Unlucky Lucy (Johansson), a twenty-four-year-old American student in Taipei, finds herself coerced into working as a drug mule for Taiwan’s most dangerous man: the powerful Korean drug lord, Mr Jang.

Having no other choice, Lucy is unwillingly subjected to a quick operation, where a synthetic, highly experimental drug is implanted inside her lower abdomen to transport it in Europe.

However, when the potent blue chemical leaks into her bloodstream, the lethal dose will initiate a mind-boggling development of her cerebral activity, unlocking extraordinary skills, and unfathomable abilities that extend past the typical 10% of brain use.

More and more, Lucy’s superpowers grow stronger by the minute; but, no one knows what will happen next. Will Lucy unlock the secrets of the fully operational human mind?

The story of the Lucy film (as described above) ended with the titular Lucy (Johansson) achieving 100% brain power and transcending thought, space, and time, to evolve into some kind of omnipotent being.

Lucy left behind a connection to our physical world in the form of a supercomputer that produced a single flashdrive for Prof. Norman to take, which was hinted to be the only “gift” Lucy left behind before transcending.

The larger world and mythos of Lucy also hinted at the revolutionary drug CPH4 (which unlocked the potential of Lucy’s mind, being mixed up in an entire black market world of gangsters and other powers.

It’s all definitely rich enough terrain for a Lucy TV series to pick up from the end of the movie and continue in the name of the character’s legacy, without every having to have Scarlett Johansson involved.

As for who was begging for Lucy to continue as a larger franchise… no one, really. 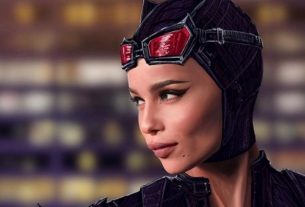 “Black Adam” exposed SDCC trailer, Henry Cavill did not show up at Comic-Con