‘Dune 2’ is in the process of filming, and a new series of ‘Dune’, the prequel ‘Dune: The Sisterhood‎’, has recently started, according to co-director Johan Renck.

“Through machinations taking place millenia before the story you all know, we descend into the coven that one day shall be named the Bene Gesserit,” said the caption Renck attached to the image of the original novel, written by Frank Herbert. The show is reportedly set 10,000 years before the events of Dune, and will focus on the Harkonnen sisters as they battle the forces while threaten humanity and the origins of the Bene Gesserit.

Dune: The Sisterhood has been described as a show set from the perspective of the Bene Gesserit, a mysterious order of powerful women who are given extraordinary supernatural abilities via the conquering of both their minds and bodies. The Bene Gesserit make their way between the warring factions, political underhandedness and intrigue of The Imperium while simultaneously pursuing their own goals which will ultimately bring them to the planet of Arrakis, better known to its inhabitants – and audiences – as Dune.

In Children of Dune, Herbert describes the Bene Gesserit’s reason for being as thus:

Religion is the emulation of the adult by the child. Religion is the encystment of past beliefs: mythology, which is guesswork, the hidden assumptions of trust in the universe, those pronouncements which men have made in search of personal power, all of it mingled with shreds of enlightenment. And always the ultimate unspoken commandment is ‘Thou shall not question!’ But we question. We break that commandment as a matter of course. The work to which we have set ourselves is the liberating of the imagination, the harnessing of imagination to humankind’s deepest sense of creativity.

Based on the original novel of the same name, Dune was released simultaneously on HBO Max and in cinemas in October 2021. Villeneuve’s adaptation was met with critical adoration and particular praise was given to Villeneuve’s direction, the epic sense of scale, and the world-building. The film was later nominated for 10 Academy Awards, including Best Picture, and ultimately won six. A sequel, titled Dune: Part Two, is currently underway and will be released in theaters on November 3, 2023.

No official release date for Dune: The Sisterhood has been set yet. Check out the official trailer for Dune, the first film in the series, below. 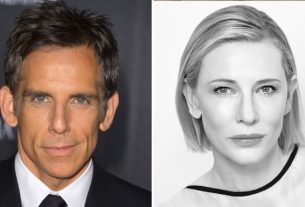 Ben Stiller will remake the classic sci-fi drama “The Champions” Chris Evans and Scarlett Johansson will usher in the ninth collaboration, co-starring in the new film “Project Artemis‎”