A new clip from Disney+’s Disenchanted shows off a brand-new musical number. The film, which hits the streaming service on November 18, is a sequel to the 2007 film Enchanted, which followed an animated princess named Giselle (Amy Adams) being transported to real-life New York City and falling in love with cynical divorce lawyer Robert (Patrick Dempsey). Included among her many fish-out-of-water antics is her ability to bring full-on musical numbers to life around her, as she does in Central Park for “That’s How You Know,” a song encouraging Robert to make sure his then-fiancée was reminded of how much he loves her.

Walt Disney Studios has now released a new clip showing off the second, brand-new number from the Disenchanted songbook. The song, which is titled “Even More Enchanted,” was co-written by the original Enchanted songwriters Alan Menken and Stephen Schwartz, who both agreed to return to write the film’s soundtrack. The clip sees Giselle attempting to encourage her stepdaughter Morgan (Gabriella Baldacchino) to believe that moving to the suburbs will be a grand adventure, even though Morgan seems trepidatious about the prospect, as well as a little sick of Giselle’s constant bursting into song after a decade. Check out the clip below:

Everything We Know About ‘Disenchanted‎’

So far, most of the plot details of Disenchanted are still being kept tightly under wraps. However, the trailer that was released in early September revealed some key moments. As shown in the clip above, Giselle and her family will be moving to the suburbs, specifically Monroeville, but the former princess will soon realize that “happily ever after” isn’t always so happy. When she makes a wish that her life could be more like a fairy tale, she accidentally invokes a magical power that will transform her into one of the most iconic of fairy tale figures: the wicked stepmother.

In addition to Adams and Baldacchino (who is replacing the original film’s Rachel Covey), the cast of Disenchanted includes quite a few returning actors and characters. Dempsey will be reprising the role of Robert alongside Idina Menzel as his former fiancée Nancy Tremaine and James Marsden as her princely beau Edward, who is now the King of Andalasia, with Griffin Newman replacing Jeff Bennett as the voice of Pip the Chipmunk. The cast also includes franchise newcomers Yvette Nicole Brown, Jayma Mays, Kolton Stewart, Oscar Nunez, and Maya Rudolph as the film’s antagonist, Malvina Monroe.

Disenchanted is one of the most prominent film titles coming to Disney+ for the year, so it will likely perform incredibly well for the platform. However, because it won’t be released in theaters, it will be difficult to compare whether it does as well as the original Enchanted, which had a total box office gross of $340.5 million off a budget of $85 million. Reviews of the new film are also still under embargo, so all fans of the original can do for the time being is look forward to its release and hope the sequel can live up to their expectations. 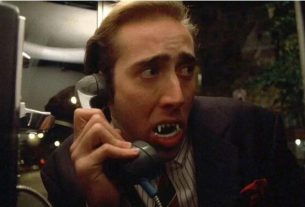 “Renfield” is in preparation, Nicolas Cage learns how to play a vampire